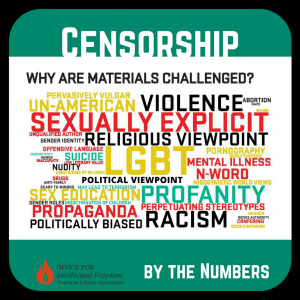 Books and plays are challenged for any number of reasons. Let’s take a look at ten of those reasons and the books on ALA’s Top Ten Challenged Books list for 2017 and previous years that were attacked for these reasons…

In 2017, several books were challenged because of LGBTQ content. Drama, a bestselling young adult graphic novel by Raina Telgemeier was challenged for the inclusion of LGBTQ characters. Alex Gino’s award-winning middle grades book George and Jazz Jenning’s autobiographical picture book I Am Jazz were both attacked because of their transgender main characters. And Tango Makes Three, a children’s picture book based on the real-life story of two male penguins that raise a chick together, was challenged for featuring a same-sex relationship.

In 2017, The Absolutely True Diary of a Part-Time Indian by Sherman Alexie was challenged for being sexually explicit.

The following books have also been challenged or banned for being sexually explicit:

The Absolutely True Diary of a Part-Time Indian and Angie Thomas’s The Hate U Give were among the titles attacked for profanity in 2017.

In previous years, the books challenged for profanity include:

Racism is among the various reasons that The Absolutely True Diary of a Part-Time Indian has been challenged. The all-ages comic series Bone by Jeff Smith, a hero’s journey that centers on a trio of three Shmoo-like creatures, their human companions, a giant red dragon, and sundry fantasy characters, has also been challenged for racism.

Other titles accused of racism:

Violence is a popular reason for challenging books. In 2017, The Kite Runner by Khaled Hosseini and To Kill a Mockingbird for challenged for violence.

Other titles attacked for violence:

Religious viewpoint has been used to attack everything from The Holy Bible to I Am Jazz.

Other books challenged for religious viewpoint:

Sex education is a touchy subject for many. Many schools regulate materials used for sex education, which means would-be censors might use that designation to try to restrict access to books that teach kids about their bodies. In 2017, Cory Silverberg and Fiona Smyth’s award-winning Sex Is a Funny Word was challenged for the very thing that it is intended to do: educate young readers about sex and gender. I Am Jazz has previously been attacked as being a sex education book in an attempt to limit access to it.

Other books attacked for educational content about sex and gender:

In 2017, a popular Netflix series triggered attacks on Jay Asher’s Thirteen Reasons Why, a bestselling young adult book that explores teen suicide. The book was banned in multiple school districts around the country. The Perks of Being A Wallflower has also been challenged for the content related to suicide.

Drug and Alcohol Use

Another reason that The Hate U Give was attacked in 2017 was the depiction of drug use.

The depiction of drug and alcohol use was also cited in challenges to the following books:

Unfortunately, some people equate nudity in books with obscenity, leading to challenges to the material. Comics and illustrated books are especially vulnerable to these challenges because they contain static images. Books that have been challenged for nudity include:

4 Comments On “10 Reasons Books Are Challenged and Banned”