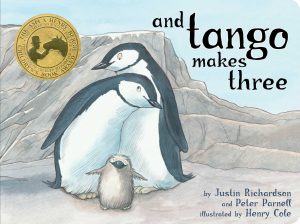 The ninth entry in the American Library Association’s 2017 top ten challenged and banned books list is old hat at censorship. And Tango Makes Three has appeared on the list a whopping eight times — in 2017, 2014, 2012, 2010, 2009, 2008, 2007, and 2006 — for challenges that mostly distill down to the book’s depiction of a same-sex relationship between penguins (“unsuited to age group,” “anti-family,” and the head-scratching accusation of being “anti-ethnic” have also popped up in challenges).

Written by Peter Parnell and Justin Richardson with art by Henry Cole, And Tango Makes Three is an illustrated children’s book that tells the true story of Roy and Silo, two male penguins at New York’s Central Park Zoo that built a nest together, took turns brooding an egg, and raised Tango, the female chick that hatched. The book, which was published in 2005, subsequently garnered critical acclaim, including starred reviews from School Library Journal, Publishers Weekly, and Booklist, and several awards, such as recognition as an ALA Notable Children’s Book, a Nick Jr. Family Magazine Best Book of the Year, and being listed as a finalist for the Lambda Literary Award.

Staff at libraries and schools found themselves facing a conundrum when the debate over the content of the book resulted in challenges. Some tried to address it by moving it from the picture book section to the less popular nonfiction section. Others moved it to areas of the library restricted to adults. It was pulled from several elementary schools, but many challenges have been defeated, ensuring the book remains in circulation.