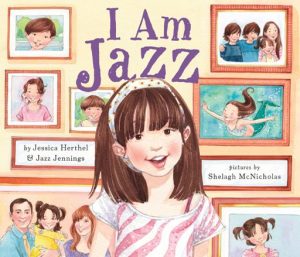 Each year, the American Library Association’s Office for Intellectual Freedom compiles a list of the top ten most challenged and banned books. In 2017, the tenth book on that list was Jazz Jennings’ autobiographical picture book I Am Jazz, which was co-written by Jessica Herthel and illustrated by Shelagh McNicholas. The teenaged television personality and LGBTQ activist wanted to share her real-life story as a transgender child, but some have challenged the work because it addresses gender identity.

I Am Jazz explores Jennings’ struggle with having “a girl brain but a boy body,” and her family’s confusion over and acceptance of her gender identity. The book was published in 2014, and it also appeared on the 2015 top ten list after a challenge in Mount Horeb, Wisconsin, caused a nation-wide furor.

In 2017, I Am Jazz was challenged at Rocklin Academy Gateway in California after the book was read aloud in a kindergarten class. The school has a policy in which students can bring in books from home to be read aloud. A student in the class was undergoing gender transition, and she brought in the copy of I Am Jazz that was read to the class. Several parents subsequently removed their children from the school and called for a policy that allowed them to keep their children from sharing a classroom with a transgender student.

The school stood behind their book policy, affirming the inclusion of LGBTQ literature in classrooms, and administrators rightly decided not to add the requested “opt out” policy, which would have been tantamount to illegal discrimination. Unfortunately, the administration chose to add a red flagging policy that would forewarn parents about potentially “controversial” material, which could invite future complaints and disrupt the educational process.

4 Comments On “Banned Spotlight: I Am Jazz”