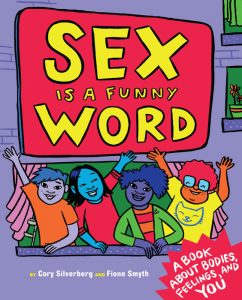 In a country where sex education remains an eternally contentious subject, it’s no surprise to see Cory Silverberg and Fiona Smyth’s award-winning Sex Is a Funny Word on ALA’s top ten challenged books list. It landed in the number six spot after would-be censors trotted out the specter of sex education fueling interest in the act by claiming that the book would make children “want to have sex or ask questions about sex.”

Silverberg is a sex educator and author who develops and presents workshops addressing gender expression and identity, sexuality, and related topics. He wrote Sex Is a Funny Word, which includes lively comics by Smyth, as a resource addressing gender and sexuality for children ages 8 to 10. The book has been widely praised for showcasing diverse bodies, abilities, and gender identities and for honestly addressing sex and sexuality as it pertains to youth. Since its publication in 2015, Sex Is a Funny Word has received a Stonewall Book Award honor, been included among the top ten choices on the Rainbow Project Book List, and named an ALA Notable Children’s Book.

Details on specific challenges are scarce or have been kept confidential, but Claudette Riley, a journalist in Springfield, Missouri, did discover that Sex Is a Funny Word was included among 36 censorship incidents in the state since 2014. It was challenged for sex education.

4 Comments On “Banned Spotlight: Sex Is a Funny Word”