A Conversation About Banned Books with Angie Thomas and Jerry Craft 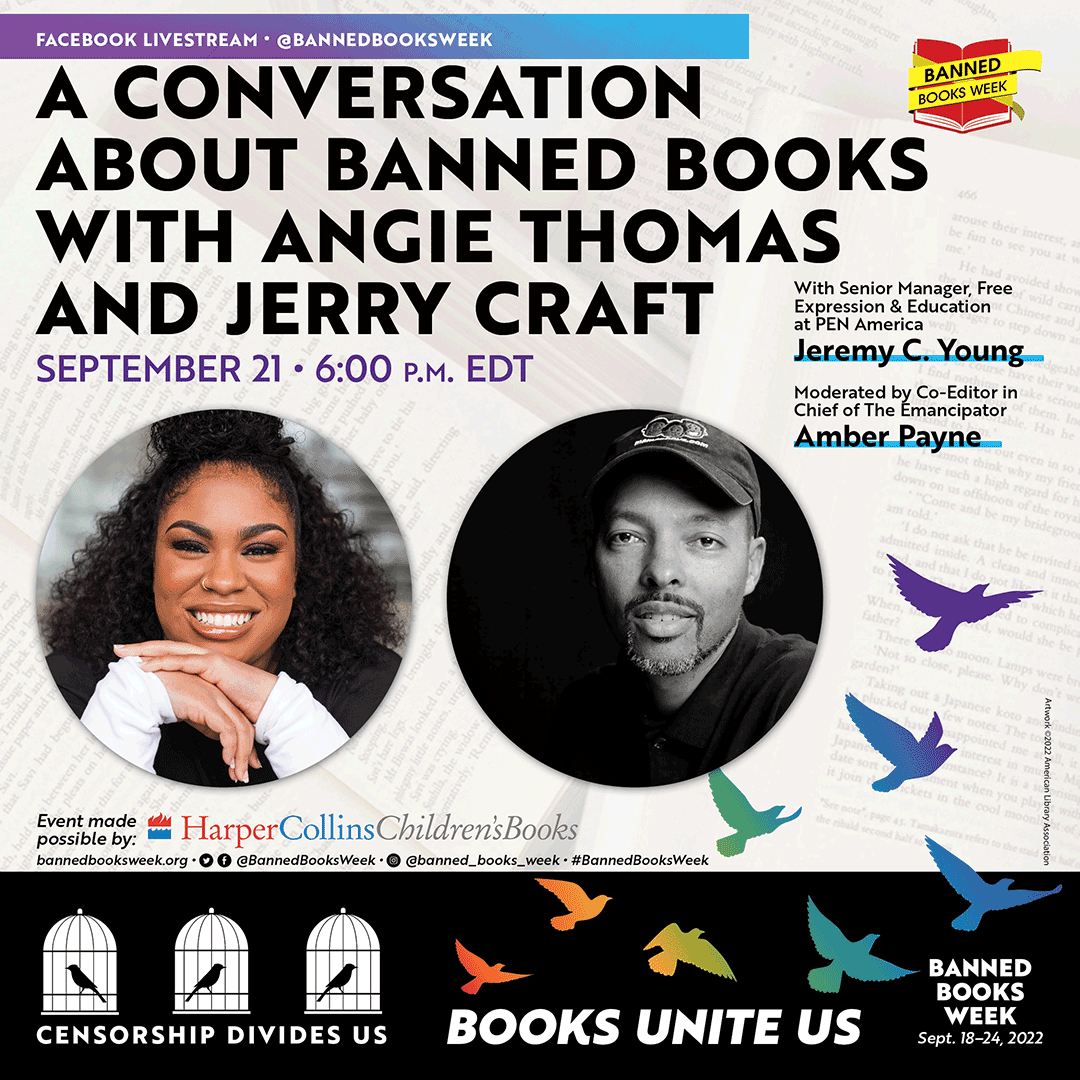 Join New York Times bestselling authors Angie Thomas (The Hate U Give, On the Come Up, Concrete Rose) and Jerry Craft (New Kid, Class Act) for a conversation about the censorship of books dealing with racial identity and racism. The authors will discuss the censorship of their work and the implications for readers, authors, and the community. They will be joined by Jeremy C. Young, Senior Manager of Free Expression and Education at PEN America, who will offer perspective on how legislation is impacting and even fueling censorship. The program will be moderated by Amber Payne, Co-Editor in Chief for The Emancipator, a digital commentary platform born from a collaboration between The Boston Globe and Boston University’s Center for Antiracist Research.

This event will stream LIVE on the Banned Books Week Facebook page on September 21 at 6:00 p.m. EDT: @BannedBooksWeek

This event made possible with the support of HarperCollins Publishers.

Angie Thomas was born and raised in Mississippi, but now calls Atlanta her home. She is a former teen rapper whose greatest accomplishment was an article about her in Right-On Magazine. She holds a BFA in Creative Writing from Belhaven University and an unofficial degree in Hip Hop. She can also still rap if needed.

Angie is an inaugural winner of the Walter Dean Myers Grant 2015, awarded by We Need Diverse Books. Her debut novel, The Hate U Give, started as a senior project in college. It was later acquired by the Balzer+Bray imprint of HarperCollins Publishers in a 13-publisher auction and debuted at #1 on the New York Times bestseller list, winning the ALA’s William C. Morris Debut Award and the Boston Globe-Horn Book Award (USA), the Waterstones Children’s Book Prize (UK), and the Deutscher Jugendliterapreis (Germany). The Hate U Give was adapted into a critically acclaimed film from Fox 2000, starring Amandla Stenberg and directed by George Tillman, Jr.

Angie’s second novel, On the Come Up, is a #1 New York Times bestseller as well, and a film is in development with Paramount Pictures with Angie acting as a producer. In 2020, Angie released Find Your Voice: A Guided Journal to Writing Your Truth as a tool to help aspiring writers tell their stories. In 2021, Angie returned to the world of Garden Heights with Concrete Rose, a prequel to The Hate U Give focused on seventeen-year-old Maverick Carter that debuted at #1 on the New York Times bestseller list.

Jerry Craft is the New York Times bestselling author and illustrator of the graphic novels New Kid and Class Act. New Kid is the only book in history to win the John Newbery Medal for the most outstanding contribution to children’s literature (2020); the Kirkus Prize for Young Readers’ Literature (2019); and the Coretta Scott King Author Award for the most outstanding work by an African American writer (2020). Jerry was born in Harlem and grew up in the Washington Heights section of New York City.

Jeremy C. Young is the senior manager of free expression and education at PEN America. In this role, he advances PEN America’s advocacy for free expression in educational institutions, advocates against censorious legislation and politically-motivated efforts to ban books and curricular materials, and supports academic freedom in higher education and the freedom to read, learn, and teach in K-12 schools. A former history professor, Young holds a Ph.D. in U.S. history from Indiana University and is the author of The Age of Charisma: Leaders, Followers, and Emotions in American Society, 1870-1940 (Cambridge University Press, 2017). He was a 2021 New Leaders Council Fellow and a recipient of the Roger D. Bridges Distinguished Service Award from the Society for Historians of the Gilded Age and Progressive Era.

Amber Payne is co-editor in chief of The Emancipator, a multimedia publication created to reimagine the first abolitionist newspapers in the United States and reframe the national conversation around race and equity. This collaboration between The Boston Globe and Dr. Ibram Kendi’s Center for Antiracist Research at Boston University will amplify critical voices, ideas, data, and debates around hastening racial justice.

Amber was a 2021 Nieman fellow at Harvard University. She formerly served as managing editor of BET.com, overseeing the daily editorial output and leading digital video strategy. Prior to that, Amber was executive producer of Teen Vogue and Them. In 2015 she launched NBCBLK, a section of NBCNews.com dedicated to elevating the conversation around Black identity, social issues, and culture. Amber started her career at NBC Nightly News producing breaking news and feature stories.  Raised in Southern Maryland, she is a graduate of the University of Virginia.