Band Against the Ban in Arizona 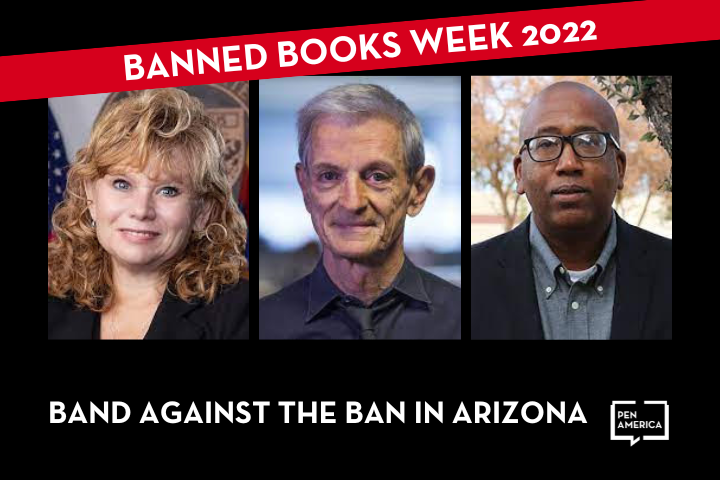 Join the PEN Arizona Chapter in Phoenix as it welcomes local leaders and writers in support of free expression during Banned Books Week 2022. These speakers include Arizona Senator Christine Marsh, American Civil Liberties Union Policy Director Darrell Hill, and veteran Arizona Republic columnist EJ Montini. The evening will include education on the current environment of book bans in Arizona, banned-book readings by local writers, socializing, a photo booth, and tips for how to band against book banning in our state.

Arizona State Senator Christine Marsh is a proud Phoenician, a graduate of Arizona public schools, and a current state senator. She raised her two sons and six foster children in Phoenix. Christine’s teaching career spans four decades. She taught junior and senior English for 25 years before making the decision to move to middle school. She is currently in her 32nd year of teaching in public schools in Arizona. In 2016, Christine was named Arizona Teacher of the Year, an experience that provided her the opportunity to travel the state to see first-hand the issues faced by Arizona’s students and communities.

She continues to teach while serving in the state senate and currently sits on the Senate Education Committee, and the Transportation and Technology Committee. In her first term, she sponsored a bill to legalize fentanyl testing strips after the tragic death of her son from a fentanyl overdose. This was one of only five Democrat-authored bills from the senate to be signed into law last session. Christine remains a staunch advocate for education and for Arizona families.

Darrell Hill is the policy director for the American Civil Liberties Union of Arizona. Darrell’s work includes legislative advocacy in the areas of abortion, voting rights, LGBTQ rights, criminal justice reform, and education equity. As policy director, Darrell Hill has worked to successfully pass legislation prohibiting the suspension and expulsion of young students for minor disciplinary infractions and legislation to address healthcare inequity during the pandemic. Before Darrell became policy director, he was an ACLU of Arizona staff attorney where he successfully litigated cases concerning voting rights, Arizona’s Free Exercise of Religion Act, public records law, and the first amendment. Darrell graduated from Wisconsin Law School and has a B.A in English and sociology from Northwestern University.

E.J. Montini is a veteran columnist for Arizona’s largest and most prominent newspaper, The Arizona Republic. He was born and raised in the southwestern Pennsylvania town of Aliquippa. His Italian immigrant grandfathers worked in the Jones & Laughlin steel mill built along the Ohio River. His father and his uncles worked there. His cousins worked there. His brother worked there. He worked there, saving money to attend Penn State, where he majored (mostly) in English literature. While still in school he took an internship at his hometown newspaper, The Beaver County Times. From there he found work with several newspapers in the east until he and his late wife, the writer and book reviewer Anne Stephenson, moved to Arizona.

He has been a news columnist at The Arizona Republic (and azcentral.com) since 1986, having covered everything from the impeachment, trial and removal of Gov. Evan Mecham, the indictment of Gov. Fife Symington, the reign of terror of Sheriff Joe Arpaio and the political psychopathy of Wendy Rogers, Mark Finchem and Kari Lake, and he contends most ardently that none of it was his fault. As a boy in St. Titus Roman Catholic Grade School the good Sisters of St. Joseph told him, sometimes with great enthusiasm, that his smart mouth would not get him anywhere.