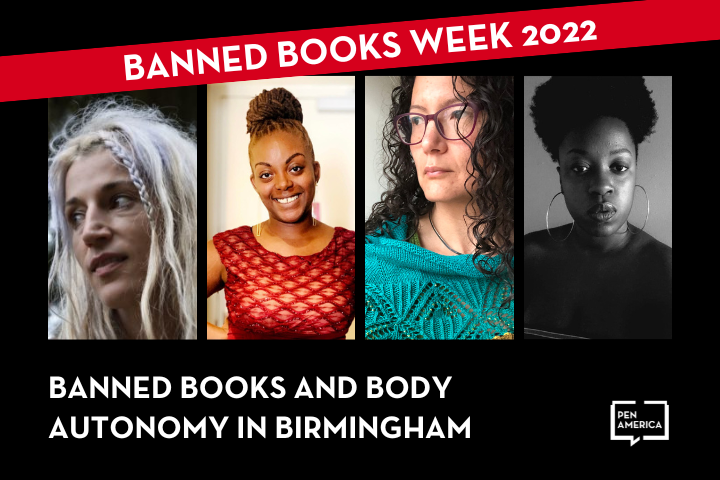 Join PEN Birmingham for an intimate conversation centering the issue of restrictive book bans targeting women, queer, trans and intersex people in an era of increasing threats to body autonomy.

In Alabama, sex education is not currently mandated, and schools that do teach sex education must emphasize abstinence. Books that offer perspectives of LGBTQ+ people are routinely banned. Since the Dobbs decision, Alabama has become one of several states that has outlawed abortion with no exception for rape and incest. As the voices and bodies of women, trans folks, and LGBTQ+ people are pushed aside, there aren’t enough resources given young people trying to work through these ideas and life events.

Alina Stefanescu was born in Romania and lives in Birmingham, Alabama. A multiple Pushcart Prize and Best of the Net nominee, her first poetry chapbook Objects in Vases (Anchor & Plume Press, 2016) won the 2016 Award for Poetry Book of the Year from ASPS. Her debut fiction collection, Every Mask I Tried On, won the Brighthorse Prize and was published in May 2018. Her writing can be found in diverse journals, including Prairie Schooner, North American Review, FLOCK, Southern Humanities Review, Crab Creek Review, Up the Staircase Quarterly, Virga, Whale Road Review, and others. She serves as Poetry Editor for Pidgeonholes, President of Alabama State Poetry Society, Board Member for the Alabama Writer’s Conclave, Co-Founder of 100,000 Poets for Change Birmingham, and proud board member of Magic City Poetry Festival. Her poetry collection, Defect/or, was a finalist for 2015 Robert Dana Poetry Award. A finalist for the 2019 Kurt Brown AWP Prize, the 2019 Greg Grummer Poetry Prize, the 2019 Frank McCourt Prize, and the 2019 Streetlight Magazine Poetry Contest, Alina won the 2019 River Heron Poetry Prize. She loves to collaborate across mediums and be the poem she wants to read in the world.

Jennine Bell is the Financial Director and Reproductive Justice Director of The Knights & Orchids Society Inc. (TKO Society). She is originally from Miami, Fla. and is currently pursuing her degree in accounting with a focus on organizational leadership at Auburn University in Montgomery, Ala. She identifies as Queer. During her time as financial director, she has raised more than half a million dollars to support TKO efforts. She has also been pivotal to the growth of TKO Society’s partner organization, West Alabama Women’s Clinic, and Queer Med. She is responsible for building community resources for TKO clients and overall organization.

Heather Miyano Kopelson specializes in the history of sexuality and the body; religion, race, and gender in the Atlantic world, slavery in the early Americas, and Native American history. She is an associate professor at the University of Alabama. Her first book, Faithful Bodies: Performing Religion and Race in the Puritan Atlantic was published by New York University Press in 2014. She is currently at work on a second book, Idolatrous Processions: Music, Dance, and Cultural Exchange in the Americas, 1500-1700, and an article, “Locating Diaspora in Eighteenth-Century Bermuda: Disorderly Dancing and the Archive of the Body.”

Jenice Fountain serves as the Yellowhammer Fund’s Interim Executive Director. She is a grassroots organizer and advocate in Birmingham, Alabama dedicated to Reproductive Justice, direct aid and reparations for Black womxn and children. Jenice -a mom herself – is the founder of Margins: Women Helping Black Women, a local community aid organization that addresses the reproductive, financial and material needs of low-income Black mothers and their children. Jenice prides herself on her work through a harm reduction lens and views her work as direct pushback to the stigmatized services that Black people are often subject to as well as a direct pushback to capitalist systems.

Over the last two years, Jenice has brought this experience to build and strengthen Yellowhammer Fund’s Family Justice program as Family Justice Organizer. A fierce advocate for abortion justice, Jenice has not only funded abortions and offered transportation to clinics, but she has also taken a firm role in supporting mothers who have been criminalized for their pregnancy related outcomes.

Jenice is a proven leader in showing her community as well as surrounding areas what true reproductive justice and agency looks like.