Banned Books Week: Whose Voices Are Still Being Censored? 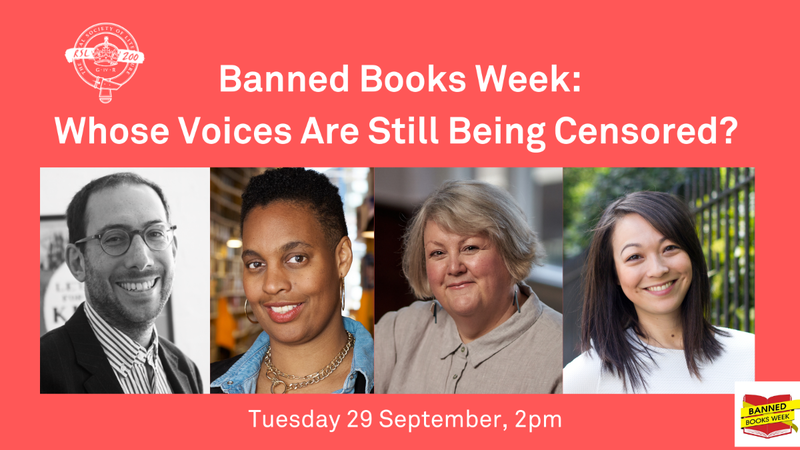 This event is FREE for all. Please register here.

Taking Banned Books Week’s theme as its starting point – a celebration of the freedom to read – our panel discussion takes stock of the commitments to inclusion and representation that have been made in publishing over the last few months. With representatives from the books industry – from editors to heads of writers’ organisations – this webinar will explore how we work together to celebrate marginalised voices in literature.

Aki Schilz (Chair) is the Director of The Literary Consultancy, which runsediting services, mentoring and literary events. At TLC Aki co-ordinates partnerships and programmes, including running the Quality Writing for All campaign which focuses on inclusivity and diversity. In 2018 Aki was named as one of the FutureBook 40, a list of people innovating the publishing industry, and was also nominated for an h100 Award for her work with the #BookJobTransparency campaign. In 2019 she was shortlisted for the Kim Scott Walwyn Prize for women in publishing, and in 2020 was named as one of INvolve’s Top 100 Ethnic Minority Future Leaders.

Adam Freudenheim  is the Publisher and Managing Director of Puskin Press. He has worked in publishing since 1998 and was Publisher of Penguin Classics, Modern Classics and Reference from 2004 to 2012. Adam joined Pushkin in May 2012, where he has launched the Pushkin Children’s Books, Pushkin Vertigo and ONE imprints, and he is particularly proud to have published the first translation of The Letter for the King by Tonke Dragt and Jakob Wegelius’s dazzlingly original The Murderer’s Ape; as well as to have introduced the acclaimed American short story writer Edith Pearlman to British readers (with Binocular Vision) and Israeli writer Ayelet Gundar-Goshen (her most recent novel is Liar).

Sharmaine Lovegrove is the Publisher of Dialogue Books, the UK’s only inclusive imprint, part of Little, Brown Book Group and Hachette UK. Dialogue Books is a home for a variety of stories from illuminating voices often missing from the mainstream. Sharmaine was the recipient of the Future Book Publishing Person of the Year 2018/19 and is inspired by innovative storytelling, and has worked in public relations, bookselling, events management and TV scouting. She was the literary editor of ELLE and set up her own bookshop and creative agency when living in Berlin. Sharmaine serves on the boards of The Black Cultural Archives, The Watershed and is an founding organiser of The Black Writers Guild. Home is London, she lives in Berlin and her roots are Jamaican – Sharmaine is proud to be part of the African diaspora and books make her feel part of the world.

Claire Malcolm is the founding Chief Executive of the literary charity New Writing North where she oversees flagship projects such as the David Cohen Literature Award, Gordon Burn Prize, the Northern Writers’ Awards and Durham Book Festival and award-winning work with young people. She works with partners from across the creative industries and charity and public sectors including Penguin Random House, Hachette, Faber and Faber, Channel 4 and the BBC to develop talent in the North. Claire is a trustee of the reading charity BookTrust, the Community Foundation Tyne and Wear and a board member of the North East Cultural Partnership.

In partnership with the Black Writers’ Guild.

Banned Books Week is presented by the RSL in partnership with English PEN, Index on Censorship and the British Library.