Join some of San Francisco’s most glamorous drag queens as they read challenged and banned picture books to entertain children of all ages! Doors will open at 2:00 p.m., with the reading to start at 2:30 p.m. The event is free and open to the public, but priority will be given to parents with their children.

Drag Queen Story Hour, which presents readings and workshops to kids of all ages in public libraries, has faced repeated challenges to its programming across the country in the past two years. By partnering with the Banned Books Week Coalition, both organizations aim to highlight the real dangers of allowing stories — and the real lives they represent — to be erased. Telling kids and readers of all ages which stories are valuable and which are not can have lasting and devastating effects. The September 28 event is a celebration of expression, inclusion, and diversity.

Banned Books Week is an annual event celebrating the freedom to read. It was launched in 1982 in response to a sudden surge in the number of challenges to books in schools, bookstores, and libraries — challenges that still happen today! The 2019 celebration will be held September 22 – 28. The theme of this year’s event proclaims “Censorship Leaves Us in the Dark,” urging everyone to “Keep the Light On.”

LGBTQ-inclusive children’s books are among the most challenged and banned titles each year. In the last few years, acclaimed picture books like A Day in the Life of Marlon Bundo by Jill Twiss and EG Keller; This Day in June by Gayle E. Pitman and Kristyna Litten; And Tango Makes Three by Peter Parnell, Justin Richardson, and Henry Cole; and I Am Jazz by Jessica Herthel, Jazz Jennings, and Shelagh McNicholas have appeared on the annual Top 10 Most Challenged Books List from American Library Association’s Office for Intellectual Freedom.

Join Banned Books Week and Drag Queen Story Hour at The Bindery in San Francisco for a fabulous celebration of reading, 2:30 – 4:00 p.m., September 28! The event also features facepainting for kids and a cash bar serving beer, wine, and cocktails for anyone 21+. RSVP on Facebook at https://www.facebook.com/events/1093204637543051/ 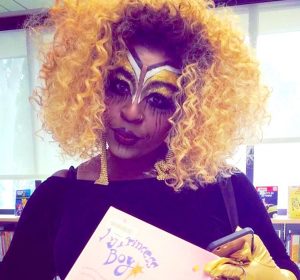 Beatrice Thomas (Black Benatar) is an arts & equity consultant, creative producer, multi-disciplinary artist and social justice drag queen — one of the core Drag Queen Story Hour storytellers. Their regenerative social practice lies at the intersection of performing arts and activism. Mx. Thomas comes from a family lineage of pastors, performers, doctors and healers. Beatrice has been making art and pondering the meaning of it all from the moment they came into consciousness. From absurdist cabarets to vampire/witch love triangles,Thomas weaves the experiences of queers and people of color into magical realities foster empathy and entertainment. Thomas nationally advances the work of marginalized \ artists, and for nearly a decade has worked in the public, creative, and non-profit sectors in the San Francisco Bay area. More recently, Thomas has dedicated her career to building community and providing professional development for individual artists and arts administrators. Previously they held senior positions at San Francisco Arts Commission, foolsFURY Theatre, and SAFEhouse Arts. They are an inaugural APAP Leadership Fellow and received their MFA from the University of Texas. 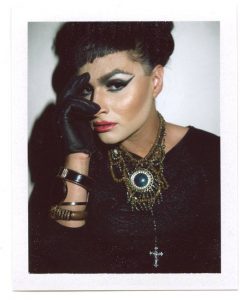 With a pedigree from performances at the late, iconic Esta Noche, Per Sia‘s trajectory has gone on to include art curation, stand-up, television, modeling, and maybe a quinceañera or two, in San Francisco, Los Angeles, New York, and México. Currently, she is a regular performer in the nationally acclaimed “Drag Queen Story Hour” as well as an educator in residence at the Children’s After School Arts (CASA) program in the San Francisco Unified School District recently profiled on KQED Arts and National Public Radio.

Find Banned Books Week events around the world at https://bannedbooksweek.org/events/

Learn more about the most challenged books at ala.org/bbooks/top

ABOUT THE BANNED BOOKS WEEK COALITION

Drag Queen Story Hour/SF (DQSH/SF) contracts with professional drag queens who are experienced youth performers and educators. They capture the imagination and gender play of childhood and give kids glamorous, positive, and unabashedly queer role models, all while promoting early childhood education and inclusive family programming. In spaces we create, kids are able to see beyond gender restrictions and imagine a world where everybody is safe and welcome and dress up is real. DQSH Queens are ambassadors for equity diversity and inclusion in family programming. Created by Michelle Tea and RADAR Productions in San Francisco, DQSH now happens regularly in L.A., New York, and San Francisco, and events are popping up all over the country and the world!

The Bindery is a multi-purpose events space and bookstore, a satellite project of independent bookstore and San Francisco legacy business The Booksmith. The events parlor has a beer, wine, and cocktail bar and hosts all manner of events, literary and otherwise, public and private. It’s home to the experimental keystone, The Arcana Project: a deep, highly inclusive array of books — fiction and nonfiction, from all over the world — presented in chronological order by the date they were written.