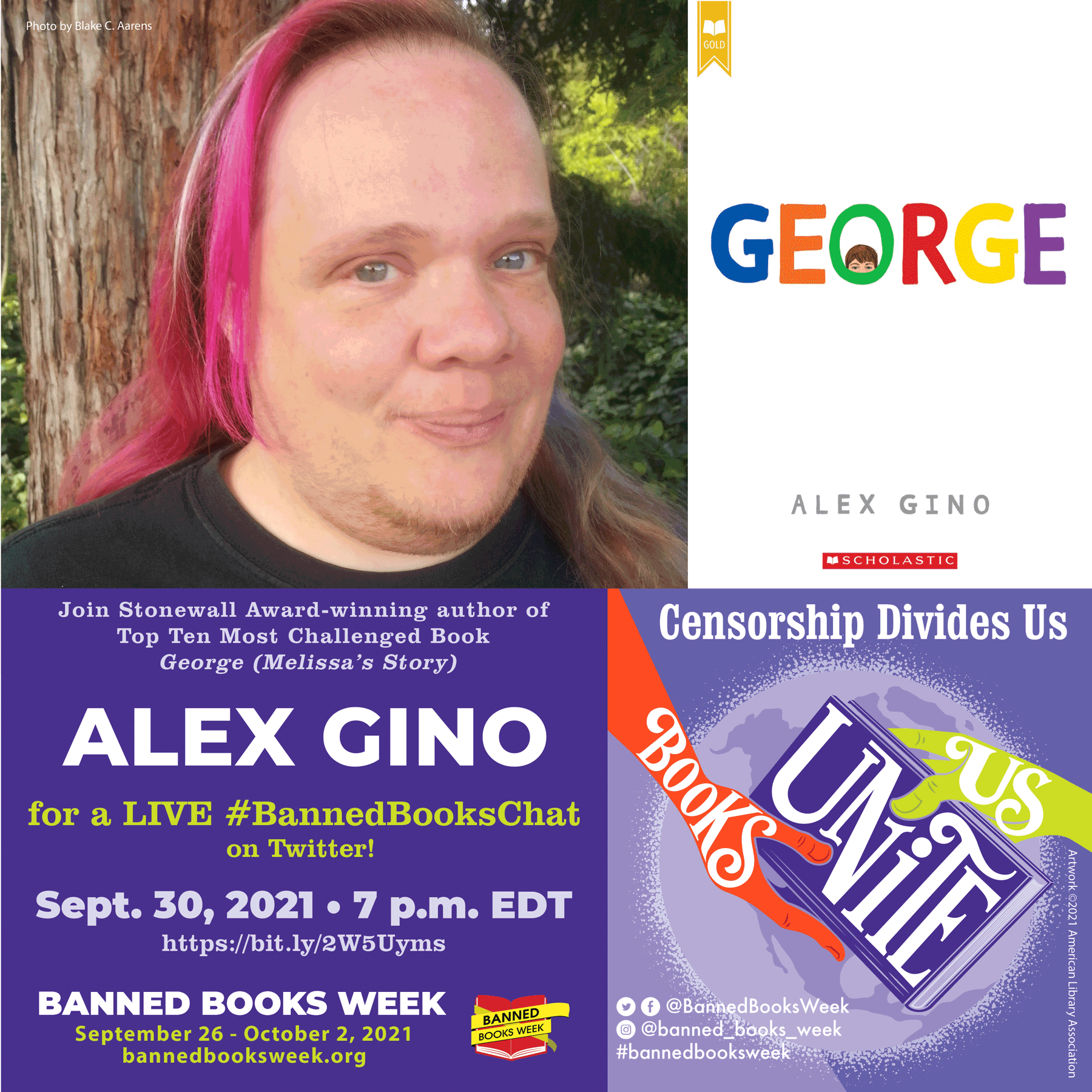 Join Alex Gino, the author of George (Melissa’s Story), for a #BannedBooksChat on Twitter! Since its publication in late 2015, George (Melissa’s Story) has been an annual fixture on ALA’s Top Ten Most Challenged books list. It topped the most recent top ten, with challenges, bans, and restrictions for LGBTQIA+ content, conflicting with a religious viewpoint, and not reflecting “the values of our community.” In this Twitter chat, we’ll discuss the importance LGBTQIA+ content, why it is frequently targeted by censors, and more!

WARM-UP: Please introduce yourself. Tell us your name and location, and tell us about – or show us! – your favorite #BannedBook! #BannedBooksChat [7:04 p.m. EDT]

Q2: For years now, books by or about LGBTQ+ people have been among the most frequently challenged. In what ways does the censorship of LGBTQ+ content harm readers, especially young people? #BannedBooksChat [7:18 p.m. EDT]

Q3: We talk a lot about what we would say to the people who try to censor books. What do we say to young people, including young trans people, who might be denied these books? How can we reassure and empower them? #BannedBooksChat [7:34 p.m. EDT]

Q4: Let’s address less obvious forms of censorship, or invisible censorship. Aside from challenges, what are some ways that people limit access to information, intentional and unintentional? How can we do better? #BannedBooksChat [7:34 p.m. EDT]

Q5: What advice do you have for people who are defending LGBTQ+ stories and programming in libraries and schools? What are some resources to which they can turn? #BannedBooksChat [7:42 p.m. EDT]

Q6: The theme of this year’s #BannedBooksWeek is “Books Unite Us, Censorship Divides Us.” What are some examples of books that bring us together? #BooksUniteUs #BannedBooksChat [7:50 p.m. EDT]

Alex Gino loves glitter, ice cream, gardening, awe-ful puns, and stories that reflect the complexity of being alive. They would take a quiet coffee date with a friend over a loud and crowded party any day. A former LSAT tutor who never touched law school, Alex can still talk your ear off about sufficient and necessary conditions.

Alex has been writing stories since before they knew the alphabet, dictating stories to their parents. They have always considered themself a writer, but it wasn’t until 2014, with the sale of MELISSA’S STORY (GEORGE) that they had any idea that authoring books would be how they make their way in the world. They are grateful for the ability to spend their time and energy on something so close to their heart.

Alex has been an activist and advocate for LGBTQIAP+ communities since 1997, when they became co-chair of what was then called the LGBA at the University of Pennsylvania. (It was renamed the QSA the year after they left.) They are proud to have served on the board of NOLOSE, a fat-positive, queer, feminist organization dedicated to supporting radical fat acceptance and culture. Alex would like to thank the Black women and other amazing BIPOC folk of NOLOSE who raised their consciousness about race and how racism permeates our culture. They are currently a member of We Need Diverse Books and PEN America.

You can keep up with Alex’s adventures mostly on Twitter (@lxgino), and occasionally on Facebook (Alex Gino, Author).

The # symbol, called a hashtag, is used to mark keywords in a Tweet, which makes it easy to see the full conversation on a particular topic. For our Twitter chat, we will use the hashtag #BannedBooksChat

At the time of the chat, type #BannedBooksChat into the search box at the top of your Twitter homepage to see the conversation. Listen in, watch the comments from other attendees, and speak up when you are ready!

When discussion questions are posed, they will be labeled with a Q and a number representing the order. If you are responding to a question, use an A and the number of the prompt. To ensure your comment is automatically pulled into the chat feed for others to see, be sure to include #BannedBooksChat in your Tweet.

Q1. What does advocacy look like for students in your classroom/community? What are some ways or tools that students use to amplify their voices? #BannedBooksChat

A huge part of Twitter chats is responding to other participants’ answers and keeping the conversation going. Because you have the questions in advance of the chat, you can have your answers ready to go if you want! Many people use a tool like TweetDeck or Hootsuite to make following Twitter chats easier.

Twitter chats move quickly! If you can’t catch everything as it’s happening, don’t worry! You can search for #BannedBooksChat to find the conversation.