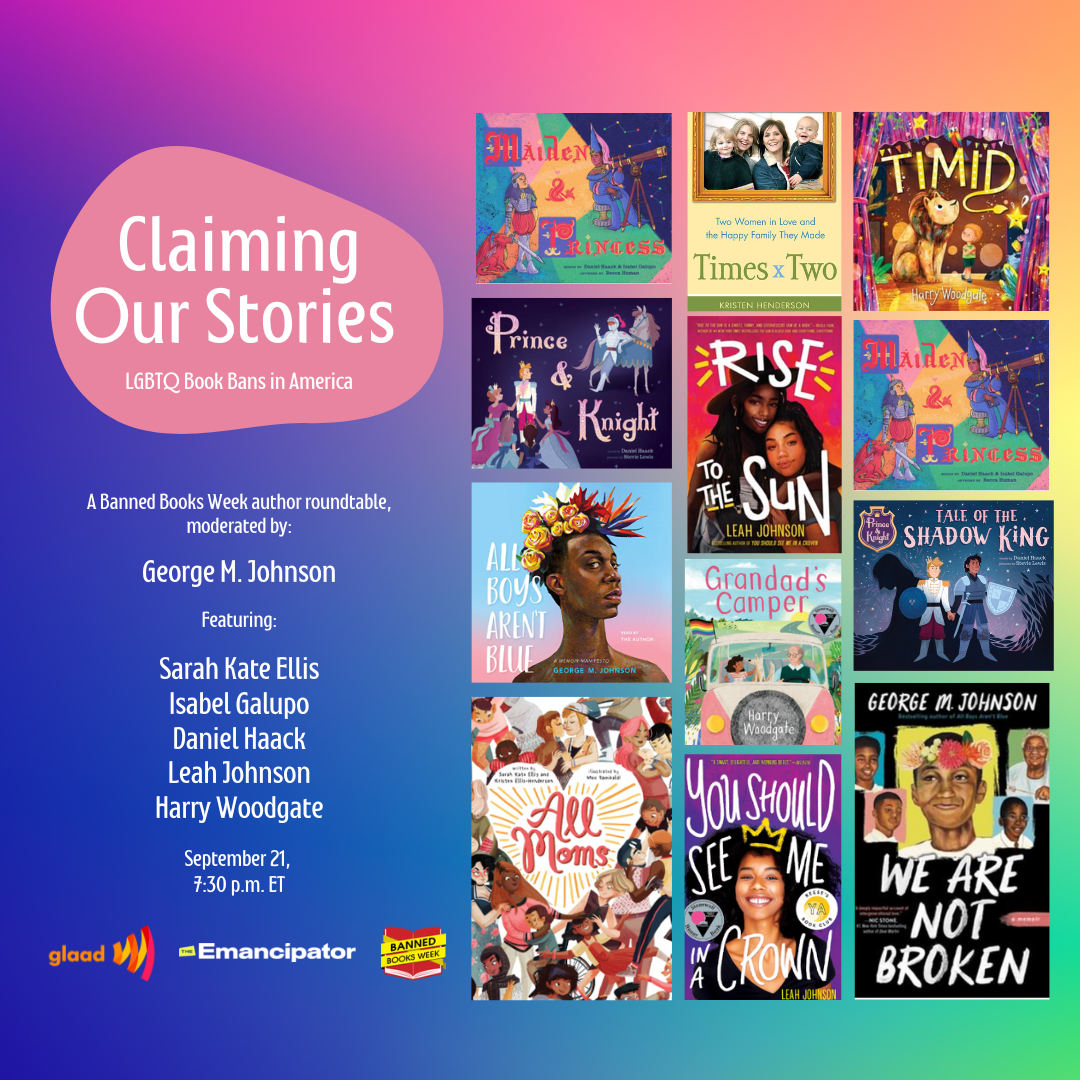 Amidst the growing threat of LGBTQ book bans nationwide, The Emancipator and GLAAD are teaming up to present a virtual Banned Books Week event at 7:30 p.m. ET, Wednesday, Sept. 21, featuring some of the nation’s best known LGBTQ authors and illustrators.

Johnson and the panelists will discuss the disturbing rise in LGBTQ book bans and assess whether parents or the political winds are the driving force. The conversation will address the racial undertones of book bans, and the divisive nature of book banning as a point of entry into excluding people and experiences that don’t conform to rigid, homophobic, racist, and xenophobic values. Panelists will also ponder the impact of book bans on LGBTQ literature: Will they intimidate and discourage publishers and writers from producing material in the future?

George M. Johnson (Moderator), “All Boys Aren’t Blue” and “We Are Not Broken”

George M. Johnson (they/them) is an award-winning Black nonbinary activist and author of The New York Times–bestselling young adult memoir “All Boys Aren’t Blue” (Farrar, Straus and Giroux, 2020) and “We Are Not Broken” (Little, Brown Books for Young Readers, 2021). “All Boys Aren’t Blue” was named a best book of the year by the New York Public Library and the Chicago Public Library, and it has been optioned for television by Gabrielle Union’s I’ll Have Another Productions. Johnson has written for several major outlets, including Teen Vogue, VICE, Entertainment Tonight, NBC, The Root, Buzzfeed, Essence, and TheGrio.

Sarah Kate Ellis (president & CEO of GLAAD), “All Moms” and “Times Two: Two Women in Love and the Happy Family They Made”

Sarah Kate Ellis is President and CEO of GLAAD, the world’s largest LGBTQ media advocacy organization. She is a frequent spokesperson, advocate and leader for LGBTQ acceptance across all forms of media including print, television, film, social media, advertising and corporate responsibility. Ellis is author of two books with her wife Kristen Ellis-Henderson, the picture book “All Moms,” and “Times Two: Two Women in Love and the Happy Family They Made,” an autobiography about their simultaneous pregnancies and road to motherhood.

Isabel Galupo (she/her) is a queer, part-Filipina, Jewish woman with three moms and a dad (yeah, you read that right). After being an only child for 10 years, Galupo found herself an overnight oldest kid with four younger sisters; this made her really good at changing diapers but also at observing, adapting, and—at times —escaping into genre fiction. It only makes sense, then, that she grew up to be a writer, constantly drawing on her unusual family dynamic and intersecting identities to tell stories at the knife’s edge of painful insight and bizarre heart. Galupo graduated from Ithaca College as a Park Scholar with a B.S. in screenwriting and a minor in sociology, and participated in the Lambda Literary Writer’s Retreat for Emerging LGBT Voices in 2015. She lives in Los Angeles, where she has written on over a dozen shows for Nickelodeon, Warner Bros. Animation, Netflix, Amazon, PBS, Apple TV+, and Mattel for preschoolers and kids ages 6-11. “Maiden & Princess” is her first book.

Daniel Haack, “Prince & Knight” and “Tale of the Shadow King”

Daniel Haack (he/him) is the author of Prince & Knight and its sequel, Prince & Knight: Tale of the Shadow King, and the co-author of Maiden & Princess, all from Little Bee Books. The former was named an ALA Rainbow List Top Ten book, a Goodreads Choice Awards nominee and was named one of the best picture books of 2018 by Amazon, Kirkus Reviews and the Chicago Tribune, as well as one of the Top Ten Most Challenged Books of 2019 and one of the Top 100 Most Banned and Challenged Books of the Decade (2010-2019). More recently, he wrote the two-part How Felix Found His Moxie for Wondery’s Little Stories Everywhere podcast. Daniel is also an Emmy Award-winning creative executive for children’s television and holds a B.S. from Ithaca College and an Ed.M. from the Harvard University Graduate School of Education.

Leah Johnson, “You Should See Me In A Crown” and “Rise to the Sun”

Leah Johnson (she/her) is an eternal Midwesterner and author of award-winning books for children and young adults. Her bestselling debut YA novel, “You Should See Me in a Crown,” was a Stonewall Honor Book, the inaugural Reese’s Book Club YA pick, and in 2021, TIME named “You Should See Me in a Crown” one of the 100 Best Young Adult Books of All Time. Johnson’s essays and cultural criticism can be found in Teen Vogue, Harper’s Bazaar, and Cosmopolitan among others. Her debut middle grade, “Ellie Engle Saves Herself” is forthcoming from Disney-Hyperion in 2023.

Their books include “Grandad’s Camper,” “Timid,” “Little Glow,” “Shine Like The Stars,” “My First Baking Book” and “The Very Merry Murder Club.”

In 2022, they won the Waterstones Children’s Book Prize for Best Illustrated Book, as well as receiving a nomination for the CILIP Yoto Kate Greenaway Award and a Stonewall Book Award Honor from the American Library Association. Their books have also been recognized in other awards including the Polari Prize and Diverse Book Awards.

Woodgate is passionate about writing and illustrating diverse, inclusive stories that inspire children to be inquisitive, creative, kind and proud of what makes them unique.