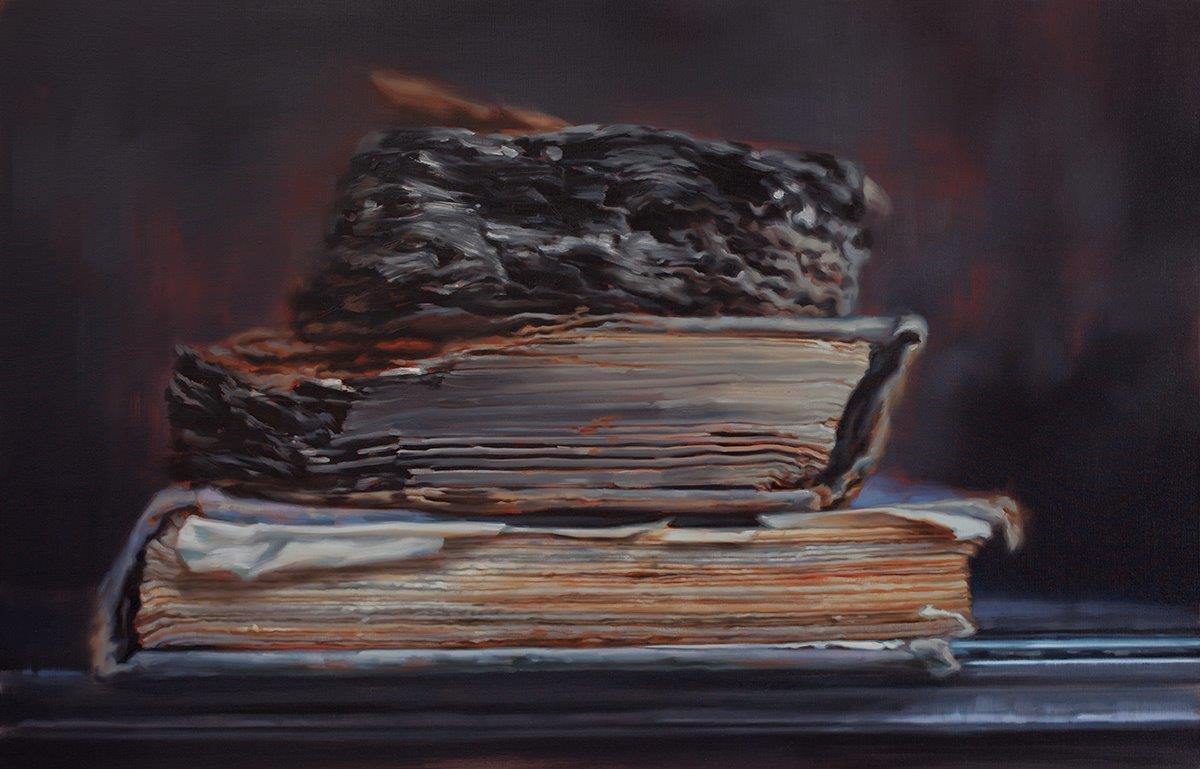 Image credit: Through Fire (Books that Survived the Anti-Japanese War of Resistance at Tsinghua University No.2), 2017. Oil on canvas. H. 48 x W. 74 in. (122 x 188 cm). Courtesy of the artist and Chambers Fine Art. Photograph courtesy of the artist.

Xiaoze Xie will discuss his research into the history of censorship in China that inspired the current exhibition Xiaoze Xie: Objects of Evidence. The artist will be joined by noted experts on the subject of censorship Martin Heijdra, Princeton University, and James Tager, PEN America in a panel led by Michelle Yun, Asia Society Museum Senior Curator of Modern and Contemporary Art.

The program is organized in conjunction with Banned Books Week, September 22-28, 2019.

The program is free and registration is required. Register here.

Martin Heijdra, Director, East Asian Library, Princeton University studied Sinology and Japanology at Leiden, Beijing, and Kyoto before receiving a Ph.D. in Ming history at Princeton University. Since then, he has published in Ming socio-economic history, and more recently, on the history of the East Asian book and non-western typography. He currently is the treasurer of the Society for Ming Studies, book review editor for the journal “East Asian Publishing and Society,” and a member of the advisory board for the Bibliography of Asian Studies.

James Tager is the deputy director of free expression research and policy at PEN America. PEN America is a membership organization for literary professionals that dedicates itself to safeguarding and celebrating literary and artistic expression, both in the United States and worldwide. PEN America is also the largest of more than 100 centers worldwide that make up the PEN International network. In this role, James has overseen PEN America’s research and advocacy engagement on freedom of expression issues in the PRC, including research reports on artistic and literary freedom in mainland China as well as Hong Kong, as well as advocacy campaigns in support of writers and others targeted for their freedom of expression.

Xiaoze Xie was born in 1966 in Guangdong Province, China. He received a BFA in Architecture from Tsinghua University in 1988, an MFA from the Central Academy of Arts and Design in Beijing in 1991, and an MFA from the University of North Texas in 1996. The artist currently lives and works in Palo Alto, CA, where he serves as the Paul L. & Phyllis Wattis Professor of Art at Stanford University.

Michelle Yun is the Senior Curator of Modern and Contemporary Art at Asia Society Museum where she oversees the modern and contemporary exhibition programs and the Museum’s permanent collection of contemporary Asian art. Yun was formerly the curator of the Hunter College Art Galleries. She has served as the Project Director of Cai Guo-Qiang’s studio and as a Curatorial Assistant in the Department of Painting and Sculpture at The Museum of Modern Art, New York, in addition to organizing numerous independently curated exhibitions. Yun is a frequent lecturer on modern and contemporary Asian art.