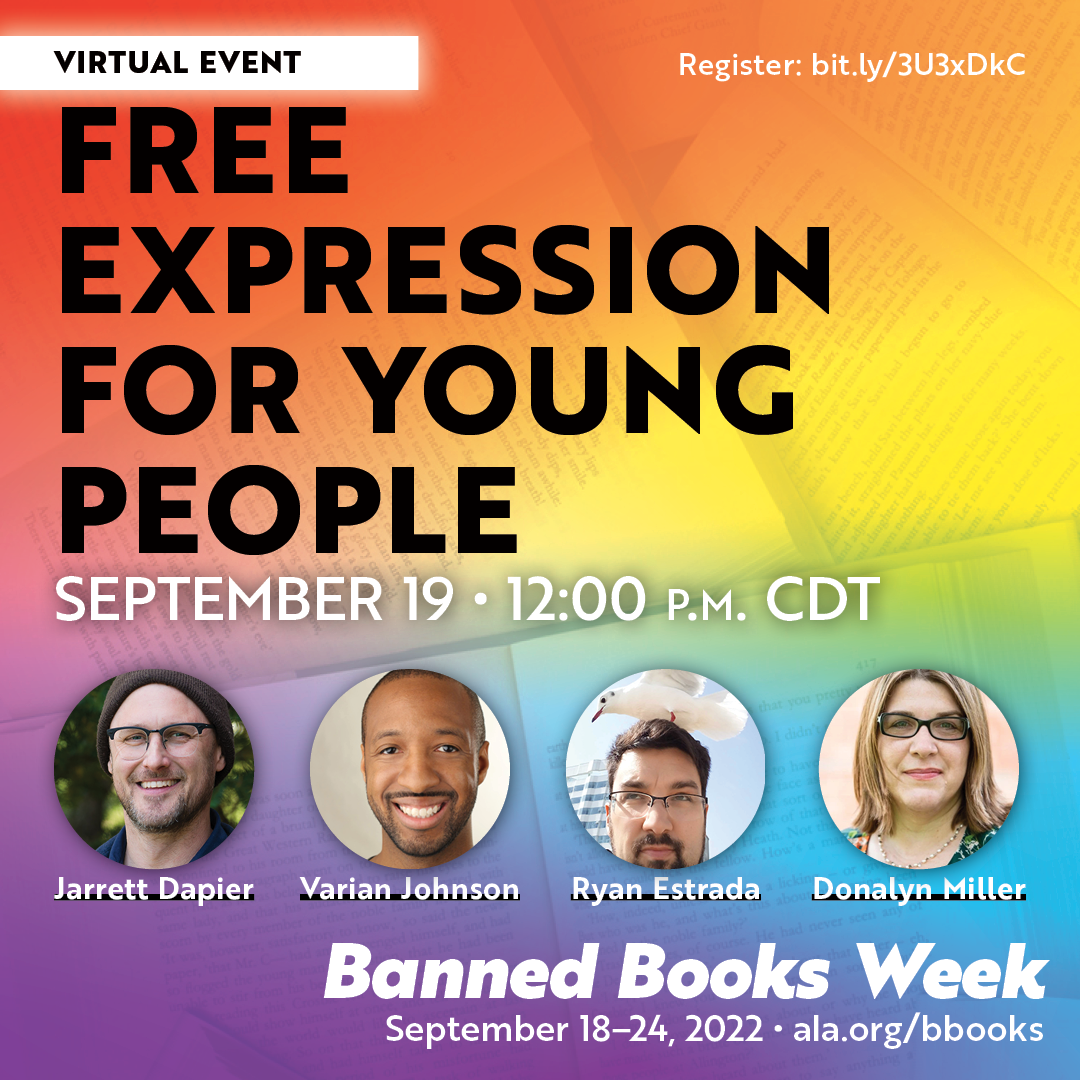 The books that are most frequently targeted for censorship are those that capture the attention of younger readers, which leaves many of them confused about the validity of their interests, their personal identities, and their First Amendment rights. This program will examine the censorship of content for young people and their rights from the perspective of authors who have written about or defended intellectual freedom for young people: Jarrett Dapier, librarian and author of the upcoming release Wake Now In The Fire, a graphic novel about the censorship of Marjane Satrapi’s Persepolis in the Chicago public school system; Ryan Estrada, co-author of Banned Book Club, a graphic novel about an underground banned book club in South Korea; Varian Johnson, author of Playing the Cards You’re Dealt and The Parker Inheritance, as well as outspoken champion for the right to read; and award winning educator and reading advocate Donalyn Miller.

Jarrett Dapier is the author of of the picture books Mr. Watson’s Chickens (Chronicle Books), Jazz For Lunch! (Caitlyn Dlouhy/Atheneum Books), and this fall’s The Most Haunted House In America (Abrams Kids). A young adult librarian with over 12 years of experience working with teens in the Chicagoland area, his stage adaptation of The Sledding Hill by Chris Crutcher, a book about censorship and grief, is published by the American Library Association’s Office For Intellectual Freedom in 2014 and is available for libraries and high schools to produce for free. In 2016, he was awarded the John Phillip Immroth Memorial Award from the Intellectual Freedom Round Table for uncovering, distributing, and disseminating previously suppressed information regarding the 2013 efforts by high-ranking Chicago Public Schools administrators to ban the graphic novel Persepolis by Marjane Satrapi. In fall 2023, his YA graphic novel, Wake Now in the Fire, based on the Persepolis incident, will be published by Chronicle Books illustrated by AJ Dungo. He is currently teaching a course on intellectual freedom and censorship at the iSchool at University of Illinois at Urbana-Champaign.

Ryan Estrada is the co-author of the Eisner-nominated, Freeman Award-winning graphic novel Banned Book Club. His upcoming books include Occulted, the true story of how banned books helped Amy Rose escape a cult, and the Banned Book Club sequel No Rules Tonight. He has made comics for Popeye, Star Trek, Garfield, and Flash Gordon. He lives in South Korea with his wife Kim Hyun Sook.

Varian Johnson is the author of several novels for children and young adults, including The Parker Inheritance, which won both Coretta Scott King Author Honor and Boston Globe/Horn Book Honor awards; The Great Greene Heist, an ALA Notable Children’s book and Kirkus Reviews Best Book; and the graphic novel Twins, illustrated by Shannon Wright, an NPR Best Book.

Varian was born in Florence, South Carolina, and attended the University of Oklahoma, where he received a BS in Civil Engineering. He later received an MFA in Writing for Children and Young Adults from Vermont College of Fine Arts, and is honored to now be a member of the faculty. Varian lives outside of Austin, TX with his family.

Donalyn Miller is an award-winning Texas teacher and independent reading advocate. She is the author or coauthor of numerous books and articles about engaging young people with reading, including most recently The Joy of Reading, coauthored with Teri S. Lesesne, and The Commonsense Guide to Your Classroom Library, coauthored with Colby Sharp. She is cofounder of the Nerdy Book Club and founder of #bookaday.