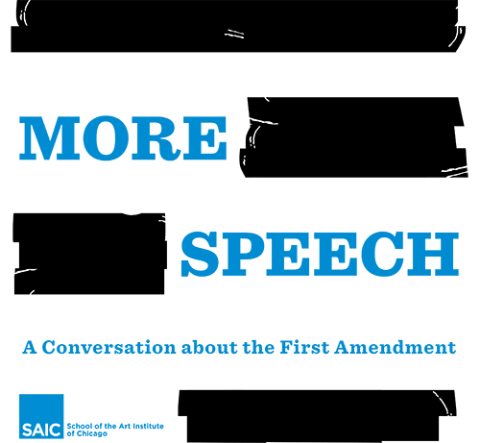 For more than 200 years, the First Amendment has impacted art and civic life through freedom of expression. Political cartoons, controversial speech, the culture wars, and images posted on social media platforms are just some of the kinds of expression that have challenged—or been challenged by—First Amendment freedoms. But what speech gets protected in the United States, and who gets to speak? Why do we restrict speech in some places more than others? What challenges do libraries face in being the custodians for a variety of speech acts? How does art shape our First Amendment freedoms?

The School of the Art Institute of Chicago (SAIC), in partnership with the American Library Association and Illinois Library Association, will host a panel discussion examining how the First Amendment impacts our freedom of speech and expression. Moderated by former WGN anchor Robert Jordan, “More Speech: A Conversation about the First Amendment” will feature the diverse perspectives of artists, journalists, historians, librarians, legal professionals, and civic leaders. “More Speech” is SAIC’s third annual Citizen Artist Forum, a public dialogue that explores how art and design intersect with issues of civic concern.

Register here to receive updates about the panel at Harold Washington Library.

The event will be first come, first served, and we expect a full room.
Doors will open at 5:30 p.m., and we suggest attendees arrive early. If you have questions please contact SAIC Events at saicevents@saic.edu or 312.499.4190.

Join the discussion via livestream at locations in central and southern Illinois. If you are interested in attending one of these livestream events, please contact one of the following locations near you.

Colleen K. Connell joined the American Civil Liberties Union of Illinois in 1984, the first woman attorney to hold this position. Her legal practice has taken her to state and federal courts of all levels, litigating on constitutional issues such as rights of the mentally ill, equal access to education, housing discrimination, employment discrimination, and freedom of speech and association. Connell has argued before the Supreme Court of the United States on matters involving the rights of women to control their own reproductive health.

Jamie Kalven is the author of Working with Available Light: A Family’s World After Violence and the editor of A Worthy Tradition: Free Speech in America, a book by his father Harry Kalven Jr. He has reported extensively on police abuse in Chicago, and his reporting first brought the shooting of unarmed Black teen Laquan McDonald by a White Chicago Police officer to public attention. Kalven has fought for police transparency and served as plaintiff in Kalven v. Chicago, in which the Illinois Appellate Court ruled that police misconduct files are public information. He is the recipient of the 2015 George Polk Award for Local Reporting, the 2016 Ridenhour Courage Prize, and the 2017 Hillman Prize for Web Journalism.

David Kohn oversees public policy advocacy activities; serves as the liaison to local, state, and federal government officials; and works to build coalitions with other civic organizations in his role as executive director of public affairs for the Union League Club of Chicago. Kohn has more than 20 years of experience in media and government, having served as press secretary to former US Congressman John Porter; senior public policy advisor at Holland & Knight; director of communications for former Illinois Lieutenant Governor Corinne Wood; and reporter, host, and producer at Chicago-area radio stations.

Diana Brawley Sussman is the director of the Carbondale Public Library and a board member for the Illinois Library Association. She was named the 2017 Librarian of the Year in Illinois. Since 2011, she has served as a co-chair of Nonviolent Carbondale, which became a nationwide model for cities in building a coalition to organize and support activities that foster nonviolent and compassionate interactions in the community. Collaborating with the 3Rs Project–Reading Reduces Recidivism–Brawley Sussman works to provide Illinois prison libraries with free used books. Under her leadership, the Carbondale Public Library has partnered with Southern Illinois University’s School of Social Work to provide social work services to the community.