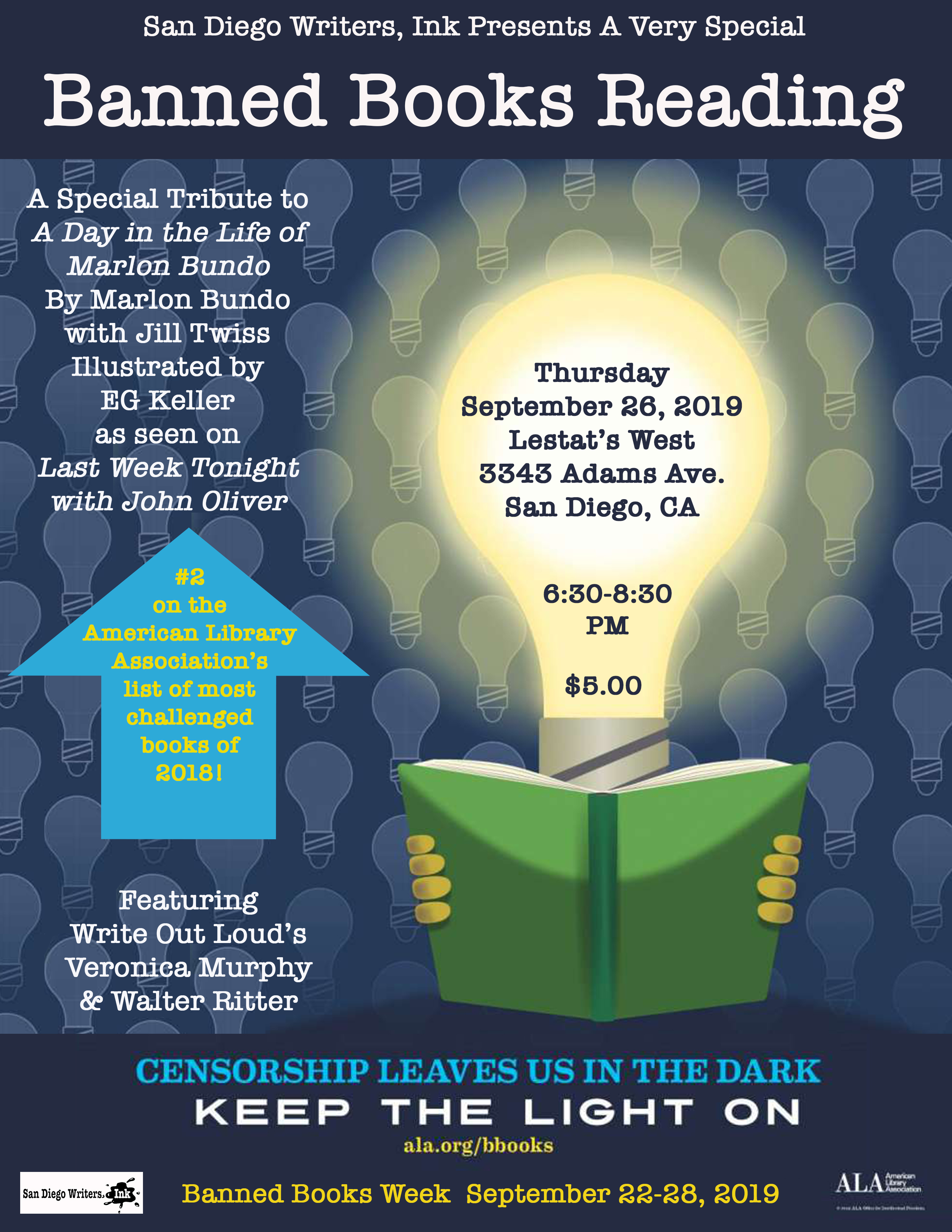 Join us as we celebrate the freedom to read. In honor of the American Library Association’s Banned Books Week, San Diego Writers, Ink is planning a very special Banned Books Reading on September 26, 2019, at Lestat’s West at 3343 Adams Avenue in San Diego’s Normal Heights neighborhood. The event will be held from 6:30-8:30 p.m., and the cost is only $5.00.

This year’s event will feature Veronica Murphy and Walter Ritter, founders of the fabulous Write Out Loud. Write Out Loud was founded in 2007 with a commitment to inspire, challenge, and entertain by reading short stories aloud for a live audience. There will be readings from a curated selection of books that have been challenged and/or banned over the years. A highlight of the evening will be a lively tribute to A Day in the Life of Marlon Bundo, written by Jill Twiss and illustrated by EG Keller. Introduced by John Oliver on his show Last Week Tonight with John Oliver—published last year in response to the release of Marlon Bundo’s A Day in the Life of the Vice President, written by Second Daughter Charlotte Pence and illustrated by Second Lady Karen Pence—the children’s book was the second most challenged book of 2018. The tribute will feature a special appearance by Marlon Bundo himself (well, okay, a man dressed in a custom-made bunny suit). At the end of the evening, the entire audience will participate in a ritual lighting ceremony as a reminder that we all have a responsibility to keep the light on so that everyone can enjoy the freedom to read.

Hosts for the evening will be Judy Reeves and Steve Montgomery. Judy Reeves (www.judyreeveswriter.com) is a writer, teacher, and writing practice provocateur whose books include A Writer’s Book of Days, named “Best Nonfiction” by the San Diego Book Awards; Writing Alone, Writing Together; A Creative Writer’s Kit; The Writer’s Retreat Kit, and most recently, Wild Women, Wild Voices. Co-founder of San Diego Writers, Ink, Judy has been leading community-based writing practice groups for more than twenty-five years, and teaches at writing conferences internationally. Steve Montgomery (www.stevenlmontgomery.com) is, with Judy Reeves, co-facilitator of Thursday Writers, a weekly drop-in writing practice group in San Diego. In his career as a public school teacher-librarian, Steve has been deeply involved in the American Library Association’s efforts to educate the public about nationwide efforts to ban or censor books in school and public libraries. Steve’s work has been published in several anthologies, including SDWI’s A Year in Ink.