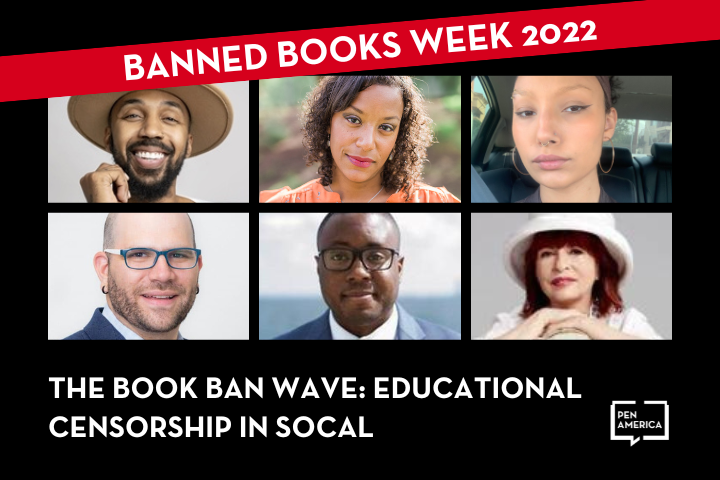 The U.S. has seen a dramatic rise in school book bans and educational censorship, in the guise of prohibitions on teachers, libraries, and curricula. Nationwide, students, teachers, and parents are facing a wave of these measures, which disproportionately target books about people of color, LGBTQ+ individuals, or books engaging themes of sexuality and gender. Books are being removed and restricted at the behest of state officials and school administrators, raising questions about students’ First Amendment rights to access information and the limits of school board policies. These trends are impacting students, families, and educators in Southern California with increasing intensity, with disagreements about appropriate school curriculum and policy rousing contentious community engagement across the political spectrum. As a fractured nation continues to struggle with difference, the rise in educational censorship is sounding alarms for advocates of free expression, given the association of book bans with the worst forms of authoritarianism. Is this surge of book bans a harbinger of what is to come? What does the rise in educational censorship mean for our students and our collective future?

Join author and Honorary Chair of Banned Books Week 2022 George M. Johnson, student activist Madison Clevenger, parent and advocate Brooke Harper, and author and historian of American education Michael Hines for a panel discussion on the story of educational censorship in Southern California and how it is impacting our communities.

This conversation will be moderated by LA Times writer, author, and podcaster Patt Morrison, with opening remarks by Jon Friedman, Director of Free Expression and Education Programs at PEN America.

This program is made possible in part by the support of the Hollywood Foreign Press Association.

George M. Johnson is a writer and activist based in Los Angeles. They have written on race, gender, sex, and culture for Essence, the Advocate, BuzzFeed News, Teen Vogue, and more than forty other national publications. George has appeared on BuzzFeed’s AM2DM as well as on MSNBC. All Boys Aren’t Blue is their debut, and was an Amazon Best Book of the Year, an Indie Bestseller, a People Magazine Best Book of the Year, and optioned for television by Gabrielle Union. The New York Times called it “an exuberant, unapologetic memoir infused with a deep but cleareyed love for its subjects.” At the time of publication, George used he/him pronouns. Speak with them on Twitter: @IamGMJohnson. iamgmjohnson.com

Madison Clevenger is a freshman at the University of San Francisco majoring in Critical Diversity Studies. Clevenger has a background in community leadership, youth advocacy, and grassroots activism. In 2022, Clevenger authored a Letter to the Editor published in MyBurbank describing the impact of educational censorship in the Burbank Unified School District.

Brooke Harper is a parent, advocate, educator, and arts professional based in Orange County. In 2020, she organized a petition condemning the Orange County Board of Education’s school reopening plan that garnered over 60,000 signatures. She has since turned her focus to her local school board in the hopes to serve the historically underrepresented families and students who live in Placentia-Yorba Linda. Through this work, she has discovered a large contingency of equity-minded families throughout her community.

Michael Hines is an Assistant Professor and historian of American education. Before coming to Stanford, Dr. Hines was a Minority Postdoctoral Fellow in History and Education at Teachers College Columbia University. He earned his B.A. in History from Washington University in St. Louis, and his M.A. and PhD in Cultural and Educational Policy Studies from Loyola University Chicago. Prior to pursuing graduate studies, he worked as an ELA and World History teacher in Washington D.C. and Prince George’s County, Maryland. Currently his research focuses on how African Americans in the early twentieth century created new curricular discourses around race and historical representation. He has been quoted in stories from EdWeek and CNN, and his work has been published in TIME, the Washington Post, the Journal of African American History, the History of Education Quarterly and the Journal of the History Childhood and Youth. His first book, A Worthy Piece of Work, from Beacon Press, is forthcoming.