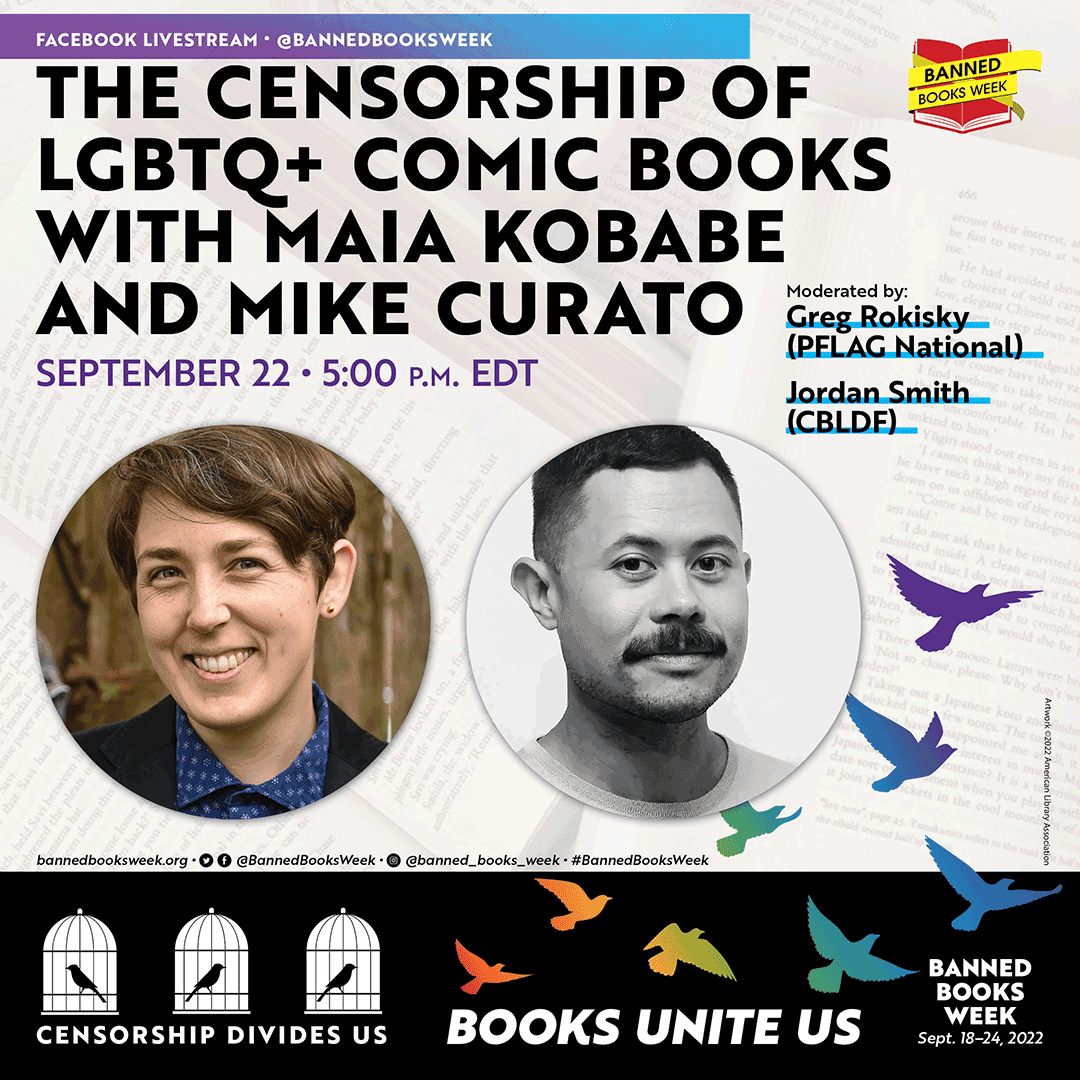 Comic books have been targeted by censors for decades, from 1954 Senate subcommittee hearings about their alleged link to juvenile delinquency, to the implementation of a content code that nearly destroyed the industry, to today’s widespread attacks on comics, especially those that share the stories of LGBTQ+ individuals. Join the creators of two of today’s most acclaimed and frequently censored graphic novels — Maia Kobabe (Gender Queer) and Mike Curato (Flamer) — for a conversation about the attempts to censor their work and LGBTQ+ stories. Greg Rokisky, Senior Manager of Digital Strategy at PFLAG National, and Jordan Smith, Digital Editor at Comic Book Legal Defense Fund, will lead the conversation.

This event will stream LIVE on the Banned Books Week Facebook page on September 22 at 5:00 p.m. EDT: @BannedBooksWeek

Mike Curato loves drawing and writing almost as much as he loves cupcakes and ice cream (and that’s a LOT!). He is the author and illustrator of everyone’s favorite polka-dotted elephant, Little Elliot. His debut title, Little Elliot, Big City, released in 2014 to critical acclaim, has won several awards, and has been translated into over ten languages. There are now five books in the Little Elliot series, including Little Elliot, Big Family; Little Elliot, Big Fun; Little Elliot, Fall Friends; and Merry Christmas, Little Elliot. Meanwhile, Mike had the pleasure of illustrating What If… by Samantha Berger, All the Way to Havana by Margarita Engle, Worm Loves Worm by J.J. Austrian, The Power of One written by Trudy Ludwig, and contributed to What’s Your Favorite Color? by Eric Carle and Friends, Sunny Day: A Celebration of the Sesame Street Theme Song, and Dear Heartbreak: YA Authors and Teens on the Dark Side of Love. Publishers Weekly named Mike a “Fall 2014 Flying Start.” In the same year he won the Society of Illustrators Original Art Show Founder’s Award. Mike’s debut young adult graphic novel, Flamer, was awarded the 2020 Lambda Literary Award for LGBTQ Young Adult and the 2021 Massachusetts Book Award for Middle Grade/Young Adult.

Maia Kobabe is a graduate of the first ever class in the MFA in Comics program at California College of the Arts in San Francisco. Eir first full length book, Gender Queer: A Memoir, came out from Lion Forge Comics/Oni Press in May 2019. Gender Queer was a winner of an Alex Award and Stonewall Honor in 2020, and it was nominated for an Ignatz Award and appeared on the Best Graphic Novels for Teens List from YALSA in 2019. It was also the most challenged book in the United States in 2021. Maia’s short comics have been published in The Nib, The New Yorker, The Washington Post, and numerous anthologies. E has also illustrated the YA prose novel We Are the Fire, We Are the Ashes written by Joy McCullough (2021).

Greg Rokisky is the Senior Manager, Digital Strategy for PFLAG National, creating engaging stories and conversations across all social and digital channels.

Based in Lansing, Mich., Greg has nearly a decade’s worth of experience in mission-driven strategic communications, public relations, and marketing work in nonprofit, corporate, and agency settings. Prior to PFLAG National, he worked as the Assistant Director of Marketing for Michigan’s public education association in service to thousands of the state’s elected school board members. He’s worked on strategic activations with brands like Zappos and Angry Birds, with influencers like Shaquille O’Neal and Frankie Grande, and on public affairs and advocacy campaigns to change hearts, minds, and policy. When it comes down to it, he is a data-driven, detail-oriented creative with a love for furthering inclusive and intersectional organizational objectives through all means of communicating and storytelling.

On the daily, Greg is fueled by a constant flow of black iced coffee, endless shelves of books, and the latest binge-worthy entertainment.

Jordan Smith is a freelance editor, writer, and actor. He also serves as the digital editor for Comic Book Legal Defense Fund. Coming from a background as a literary manager for the stage, Jordan believes in the power of storytelling. As an actor, Jordan supplied the motion reference and voice of Ghal-Sur in the recent rotoscoped dark fantasy film The Spine of Night.