The Kids Are Alright: Youth Activists on Fighting Censorship 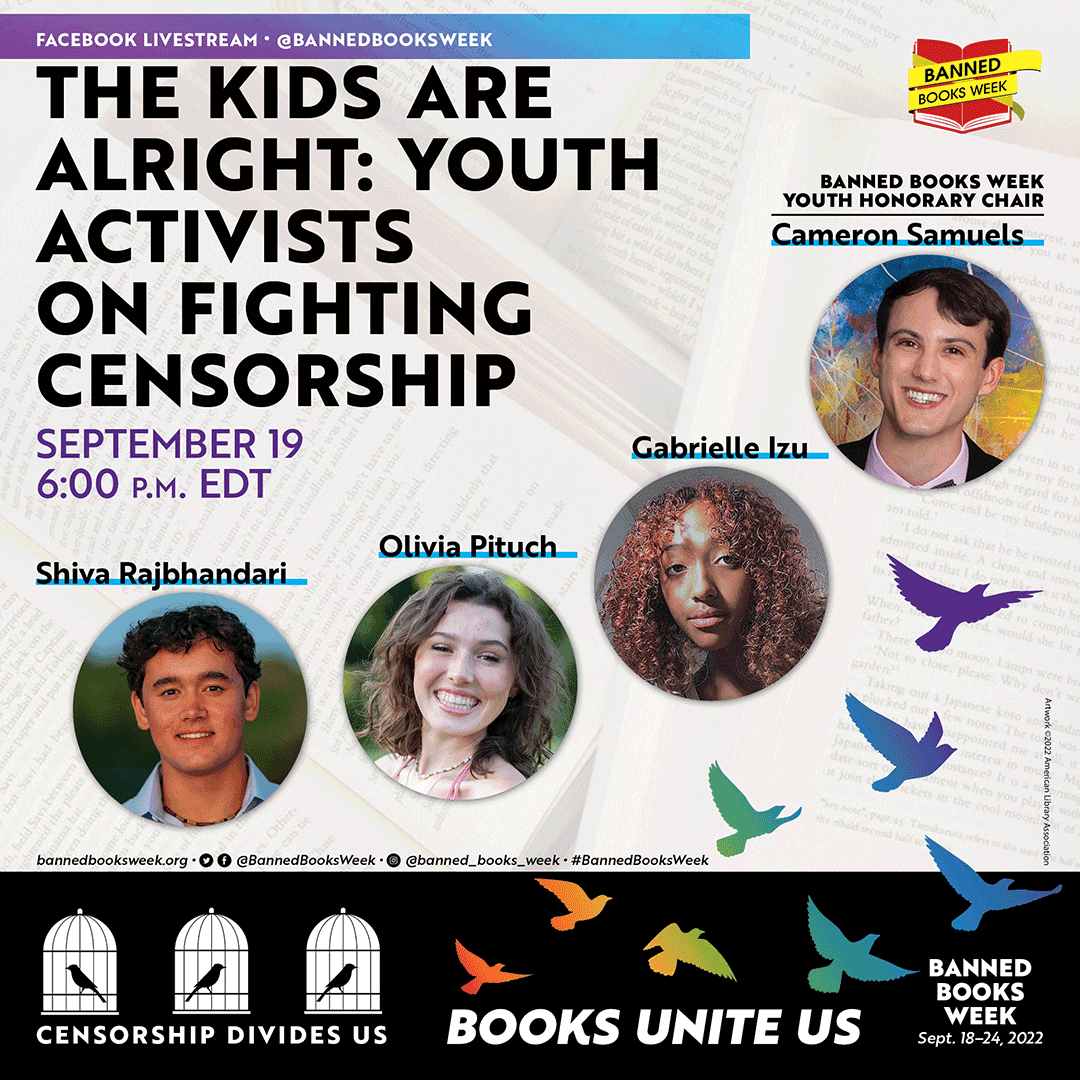 What is it like to be the only teen protesting censorship at school board meetings? How do you go from being the only voice of opposition to leading the fight against censorship in your community – and inspiring others to do the same? In this program, Banned Books Week Youth Honorary Chair Cameron Samuels (they/them) will lead a conversation with youth activists from around the United States. These inspiring young leaders will talk about their experiences and share their ideas for how others can get involved!

This event will stream LIVE on the Banned Books Week Facebook page on September 19 at 6:00 p.m. EDT: @BannedBooksWeek

Cameron Samuels (they/them) recently graduated from the Katy Independent School District in Texas, where they organized the FReadom Week initiative to eventually distribute a total of 700+ challenged or banned books. Once the only student to speak at school board meetings, receiving no applause while other speakers called for book banning, Samuels built a student-led movement within months by packing school board meetings and continuously outnumbering the opposition. Decisions were made to keep certain books on shelves, and while currently a student at Brandeis University, Samuels’ efforts to combat censorship across the state of Texas and the nation are ongoing. Samuels is the inaugural Youth Honorary Chair of Banned Books Week.

Gabrielle Izu (she/her) is a current International Relations and Global Studies major at the University of Texas at Austin and is passionate about community enriching volunteering and activism. She has been an advocate against discriminatory book bans since early 2021 and firmly believes that the banning of affirming books is detrimental to underrepresented communities everywhere.

Olivia Pituch (she/her) is an 18-year-old activist and member of the LGBTQ+ community. She served as Secretary and Social Media Advisor on the executive board of the Panther Anti-Racist Union, a student-run club at Central York High School. Along with her fellow officers, Olivia organized multiple protests that led to the reversal of a book ban instituted by the district school board, which removed more than 300+ books on diversity. With the need for activism, Olivia found her voice and hopes to spread this message across the country, uplifting and empowering the voices of the youth to effect positive change. She plans to continue the fight for diversity and representation by majoring in the field of Political Science at Elizabethtown College.

Shiva Rajbhandari (he/him) is a senior at Boise High and a community organizer against extremism in Idaho politics. Earlier this month, he gained national recognition after defeating an incumbent associated with far-right organizations on the Boise School District Board of Trustees. Rajbhandari has also organized students to stand up to the Idaho Lt. Governor’s “Indoctrination Task Force” and bans teaching about systemic racism in schools. As the first student and only person of color to serve on the Board, Rajbhandari is an advocate for student empowerment and teacher freedom in and out of the classroom.