Banned Books Week is finally here! We have a rundown of virtual events and the many, many ways you can participate in the celebration on social media! Censorship is a dead end — find your freedom to read during Banned Books Week, September 27 – October 3!

Books on the Chopping Block is our annual 60-minute performance of dramatic readings of short excerpts taken from these books. City Lit has teamed up with the ALA in celebration of Banned Books Week since 2006, performing at special events, libraries and bookstores in and around Chicago…and virtually this year. More…

Alex Cox (Image Comics) in conversation with a member of the Intellectual Freedom Round Table on the history of the Comics Code Authority and its impact on comics censorship. This discussion will also touch on how current ratings systems and library classifications can impact readership. Register here. More…

On Sept. 29, SAGE Publishing and OIF will host the free webinar “COVID-19 and Academic Censorship,” which will address e-books, internet control, and open data. The free webinar is limited to the first 1,000 guests. Register here. More…

Valentine De Landro (Bitch Planet, X-Factor), Johnnie Christmas (Tartatus, Sheltered) and Chuck Brown (Bitter Root) in a conversation on how Black people have been historically portrayed in comics, from the obstacles of integrating Black characters into mainstream and superhero comics to present day works, issues Black creators face working in the comics industry, and the importance of non-white characters existing on the comics page. Moderated by Tamela Chambers, Librarian and Public Library Chair the Black Caucus of the American Library Association (BCALA). Register here. More…

Books on the Chopping Block is our annual 60-minute performance of dramatic readings of short excerpts taken from these books. City Lit has teamed up with the ALA in celebration of Banned Books Week since 2006, performing at special events, libraries and bookstores in and around Chicago…and virtually this year. More…

(Un)Welcome to the Comics Industry

It’s not just libraries that have banned comics – sometimes it’s the comics industry itself. Chloe Ramos (Image Comics) and other panelists in conversation with Dan Wood (Escondido Public Library) will discuss how harassment serves as a form of censorship within the industry by creating unsafe and unwelcoming environments, and how awareness of these issues is important for librarians to understand. Register here. More…

Celebrate your freedom to read by joining us for a virtual presentation of dramatic readings by City Lit Theater Company featuring the American Library Association’s list of top 10 most challenged books of 2019. City Lit has performed this annual event since 2006 and is excited to showcase these books and to engage with you about censorship and the freedom to read during a Q&A session following the readings. More…

On Oct. 2, OIF will host a national watch party of “Scary Stories,” a documentary about the banned and challenged series “Scary Stories to Tell in the Dark” by Alvin Schwartz, followed by a Q&A with director Cody Meirick on the Banned Books Week YouTube channel. Libraries and readers are invited to stream the documentary on Tubi or Amazon Prime at 6 p.m. CST and join the conversation on Twitter using #CensorshipisScary or on the Facebook event page. Libraries are invited to host their own watch parties as a Banned Books Week program; more details are available at ala.org/bbooks/scarystories.

Comics: “Are These Real Books?”

Charles Soule (Undiscovered Country, Daredevil) in conversation with Matthew Noe (GNCRT President-Elect) on why comics so often wind up on annual most challenged books lists, what comics are most often challenged, and what you can do to overcome negative opinions of comics. Register here. More…

Make your own Banned Books Week assets for social media! We have several different formats of our main banner that you can add your own information to, or you can share your favorite banned books and trivia with our customizable digital shelftalkers! Check out the entire set or downloadables here. More…

Each day of Banned Books Week, OIF will promote a different action that spotlights literary activism. Titled #BannedBooksWeek in Action, readers are encouraged to share their activities on social media with the hashtag, focusing on the following daily topics:

The annual Dear Banned Author letter-writing campaign encourages readers to write, tweet or email their favorite banned/challenged author during Banned Books Week. Postcards, author addresses and Twitter handles, and tips for hosting virtual programs can be found at ala.org/advocacy/bbooks/dear-banned-author. Examples of letters and programs are published on the Intellectual Freedom Blog. Those who use #DearBannedAuthor on Twitter will be entered into a grand prize drawing of Banned Books Week merchandise. Details and Official Rules are listed on the Dear Banned Author webpage.

Stand for the Banned Read-Out

Since the inception of Banned Books Week in 1982, libraries and bookstores throughout the country have staged local read-outs of banned and challenged books. The Stand for the Banned Read-Out invites readers to submit brief videos of themselves reading from a banned book or discussing censorship. Submitted videos may be added to the Banned Books Week YouTube channel.

Banned Books Week is almost here, but it’s not too late to put together a display or event at your library, school, or store! The Banned Books Week Coalition is ready to help you put it together — and promote it — with some last-minute ideas and resources!

ALA’s Dear Banned Author letter-writing campaign encourages readers to reach out to banned or challenged authors via letters, emails, and tweets. The program aims to raise awareness of books that are threatened with censorship and ignite discussions about the essential access to a variety of library materials. Authors have also shared fan letters as support when there’s a public challenge to their books.

It’s easy to host a Dear Banned Author programs. Printable postcards and author mailing addresses can be found on the Dear Banned Author webpage. Set up a table in your library or classroom or put them on the checkout corner, and encourage your visitors to participate!

You can also participate online or invite your patrons to do so while they’re in your library, school, or store. Eligible tweets to or about banned and challenged authors with the hashtag #DearBannedAuthor will be entered into a drawing to win Banned Books Week materials. Learn more here, and read the Official Rules before entering. 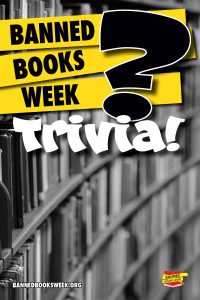 Trivia nights, also called pub quizzes, quiz nights, or bar trivia, are a great low-cost way to engage your community for Banned Books Week and beyond! The Banned Books Week Coalition assembled a program kit that provides a basic outline and tips for hosting your own trivia night, along with templates for promotional and support materials and questions you can use during your event. Find out more here.

Start the conversation about Banned Books Week by making a display in your library, classroom, or store! Here are just a few ideas: