Banned Books Week is rolling strong, and today’s events include webinars, comics as inspiration, readings, Salman Rushdie and Laila Lalami, and so. much. trivia!

Let’s take a look at how people are celebrating today! 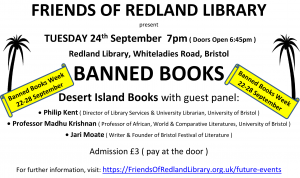 The theme of the event is Banned Books and this is defined as books that have been banned, censored or challenged. In Desert Island Books, panel members select one or more books on the event theme plus a ‘wild card’, being a book that they have enjoyed and would recommend to others.

The event starts at 7pm, with doors opening at 6:45pm. Find out more »

A reading and discussion of the 1962 play by John Osborne at the British Library in London, which miraculously avoided a ban at a time when attitudes towards sexual behaviour were just turning. How differently would the play’s themes of privacy and public morality be received today?This is a Banned Books Week event in partnership with the British Library, Booksellers Association, English PEN, Free Word, Hachette UK, Index on Censorship, Islington Council’s Library and Heritage Service, Libraries Connected, The Publishers Association and The Royal Society of Literature. Find out more »

The Power to Inspire: Comics, Community & The Future of Intellectual Freedom 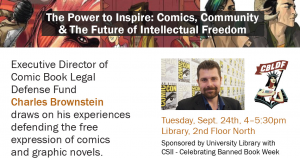 In the intellectual freedom community, our job is to change the world one mind at a time. With identity censorship rampant and an increasingly polarized social climate, the core value of free speech is now being called into question. During Banned Books Week, CBLDF Executive Director and Banned Books Week Coalition Chair Charles Brownstein draws on his experiences defending comics and graphic novels to reflect on the role of free expression in creating a culture of empathy, respect, curiosity, and intellectual freedom. Find out more » 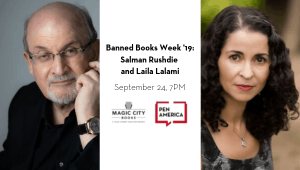 Salman Rushdie returns to Tulsa for a celebration of his new novel, Quichotte, a dazzling Don Quixote for the modern age—a tour de force that is as much an homage to an immortal work of literature as it is to the quest for love and family. PEN America, alongside Magic City Books, is thrilled to commemorate this release right in time for Banned Books Week!

Rushdie, a former president of PEN America, will be joined in conversation by Pulitzer Prize finalist and PEN America Member Laila Lalami whose most recent and timely novel, The Other Americans, is at once a family saga, a murder mystery, and a love story, all informed by the treacherous fault lines of American culture. Join us to discuss a literary interpretation of a classic and the accompanying satirical commentary on our modern age of alternative facts. Find out more »

Join Scuppernong Books on Tuesday, September 24 to celebrate banned and challenged books from around the world. In honor of Banned Books Week 2019 , the event will feature readings of banned books and involve the Scuppernong’s Young Adult Book Club, as well as the general public, with an educational component around PEN America’s Literature Locked Up campaign and provide an opportunity for participants to sign a petition calling for the right to read in American prisons. Find out more »

Andras Riedlmayer, Bibliographer in Islamic Art and Architecture, Harvard Fine Arts Library and Radu Popa, Assistant Dean for Library Services & Director of the Law Library, NYU will share their stories, from testifying before the ITCY to fleeing communist Romania. Co-sponsored by the Harvard Law School Library, the ACLU at HLS, the Harvard Law School Rule of Law Society, the Law and Philosophy Society, and the International Human Rights Clinic. A non-pizza lunch will be served. Find out more » 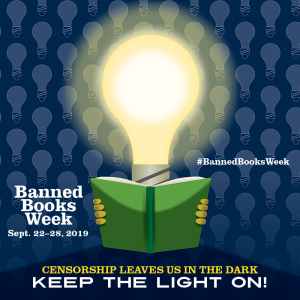 (Adults and teens ages 15+) Join us in reading passages and sharing the history from your favorite banned or challenged books. Find out more » 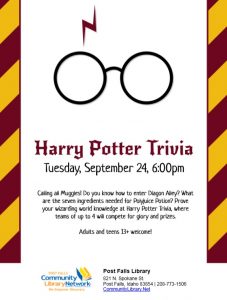 Calling all Muggles! Do you know to get to Diagon Alley? What are the seven ingredients needed for Polyjuice Potion? Prove your wizarding world knowledge at Harry Potter Trivia, where teams of up to 4 will compete for glory and prizes. Adults and teens 13+ welcome! Find out more » 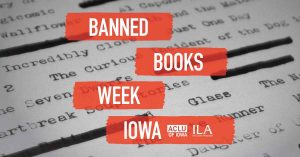 Join the ACLU of Iowa and the Iowa Library Association in celebrating our First Amendment rights and freedom to information! The questions will include a wide range of topics, but you don’t need to be a censorship expert to join and win fun prizes. All proceeds benefit the ACLU of Iowa and the ILA in their work to protect free speech rights and bring raw attention to the harmful effects of censorship. Tickets are $10 per person. Find out more »