It’s the last hurrah for Banned Books Week! How are you celebrating the right to read on the final day of celebration? Here are a few suggestions for events around the country! 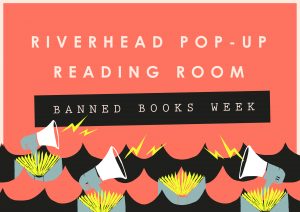 You’re invited to the latest installment of Riverhead’s open-air, thematically curated pop-up reading rooms! September’s pop-up is in honor of Banned Books Week; join us in celebrating the freedom to read as we feature books and authors from the Riverhead collection that have been challenged in schools and libraries around the country, or address themes or topics that inspire passionate discussion, from startling subversions of religion in Khaled Hosseini’s acclaimed novel The Kite Runner to profoundly honest explorations of sexuality and oppression in Garrard Conley’s memoir Boy Erased. Throughout the day, peruse books that start essential conversations: our shelves will be stocked with Mohsin Hamid’s heartrending and inventive Exit West, R.O. Kwon’s explosive The Incendiaries, and Patricia Lockwood’s equal parts saucy and sublime Priestdaddy. Younger readers are encouraged to attend and get lost in wonderfully original and illuminating titles like John Green’s Looking for Alaska, David Levithan’s Two Boys Kissing, Roald Dahl’s James and the Giant Peach, and many more titles courtesy of our friends at Random House Children’s Books and Penguin Young Readers.

Stop by the pop-up to read, to engage with fellow readers about the vital need for books that generate debate and deeper reflection, and take part in Banned Books Week activities that amplify the stories and voices of those that need to be heard today. The pop-up will ask visitors to consider the question: What would it be like to live in a world without open access to ideas and literature? There will be sponsored snacks and beverages available on-site, and a chance to win Riverhead totes filled with signed copies of the hottest new books by Riverhead authors Khaled Hosseini (including his latest illustrated novel Sea Prayer), Meg Wolitzer, and Lauren Groff, as well as a custom Penguin Random House Banned Books Box. 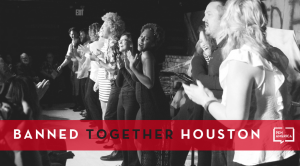 Join the Dramatists Legal Defense Fund, in partnership with PEN America, as they present Banned Together: A Censorship Cabaret during Banned Books Week 2018 (September 23-29). This lively celebration of songs and scenes from shows that have been censored or challenged on the American stage raises awareness around issues of censorship and free expression in theater. The performances will feature selections from Chicago, Fun Home, Spring Awakening, and The Laramie Project, among other notable works. Join Producing Executive Director, Marley Singletary, who will direct Equity actors and Tribble School for the Performing Arts students, in this celebration of songs and scenes. The pieces will be linked with a libretto by DLDF president John Weidman.

This year, Penguin Random House is highlighting quotes from books that have been challenged or banned in a social media sweepstakes competition, open to participants who repost these quotes or tag a friend and comment with the hashtags #BannedBooksWeek and #Sweepstakes. For every entry, Penguin Random House will donate one book – up to 5,000 total – to We Need Diverse Books, a non-profit organization dedicated to helping produce and promote literature that reflects and honors the lives of all young people.

Banned Books Week 2018, the annual celebration of the freedom to read, will be held September 23 – 29. The 2018 theme, “Banning Books Silences Stories,” is a reminder that everyone needs to speak out against the tide of censorship. Celebrate our local authors and artists as they take to the stage and speak out against censorship. Bring something to read (an excerpt from a banned book, maybe?) or something to play (protest songs seem appropriate, yes?) and join Ellen Plumb’s City Bookstore as we take a stand against censorship. We’ll be posting video, Facebook LIVE, as we celebrate Banned Books Week. More info…

The Friends of the Public Library of Cincinnati and Hamilton County are participating in Banned Books Week. Check out our display when you are shopping. Grab a coloring sheet and enter our coloring contest. Pick up a free Banned Book Week bookmark. Most of all, find hundreds of banned and challenged books on our shelves. Saturdays 10:00 am-4:00 pm

Books on the Chopping Block
September 29

The Kurt Vonnegut Museum and Library is celebrating the freedom to read and expression of ideas during Banned Books Week! This year, Ball State University English professor Rai Peterson will be living in the front window of KVML as our prisoner. For the entire week she will be imprisoned behind a wall of banned books, while joining the community in exploring censorship and challenged works. From September 24-29, we invite you to join our prisoner for readings and discussions with guests such as Indianapolis Mayor Joe Hogsett, IUPUI professor Trevor Potts, Hunter S. Thompson’s son Juan Thompson, playwright Kenneth Jones, and more! More info…

Stand up against censorship by participating in a virtual read out! We will record you reading a banned or challenged book on iMovie. Then, we will guide you through the editing process, and we will post them to YouTube for Banned Books Week! More info… 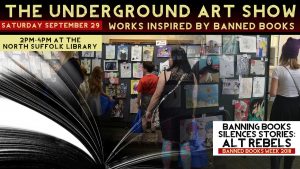 On this date, we challenge all ages to create a piece of art based off of a banned book for an open reception where all the art will be displayed, judged, and winners will receive a prize. Passive art-making stations will also be set up. Art submissions will be accepted September 1st through the 28th at all three branches. You will be asked to fill out a submission form when dropping off your piece. More info…

All week in store, you can come by and see our Banned Books display and learn about books banned throughout history. To wrap up Banned Books Week, we’re hosting a Banned Books Trivia Night. There will be a $5 entry fee, the proceeds of which will be donated to The American Booksellers for Free Expression, whose mission is to promote and protect the free exchange of ideas, particularly those contained in books. There will be prizes for the top three scores and a whole lot of fun! More info…

Celebrate Banned Books Week with your friends from Solid Jackson Books, Dundee Book Company, and Brothers Lounge! We’ll have a trivia game and other activities. Plus beer, cocktails, and darts! Grab a pint or two, join the conversation about why it’s important to keep free speech free, and stick it to the book-burners by perusing important books that some want to label as obscene. And some that are obscene, but only in the best ways. A selection of banned and band books (both used and new) will be available for purchase. More info… 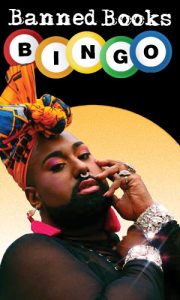 To celebrate Banned Books Week this year, we’re doing banned book-themed bingo night! There will be 6 rounds, all different themes, and one winner per round. Winners will be awarded Strand goodies and prizes. The evening will be bookended (get it?!) by performances by our invited Queen of the Banned, SOL! More info…