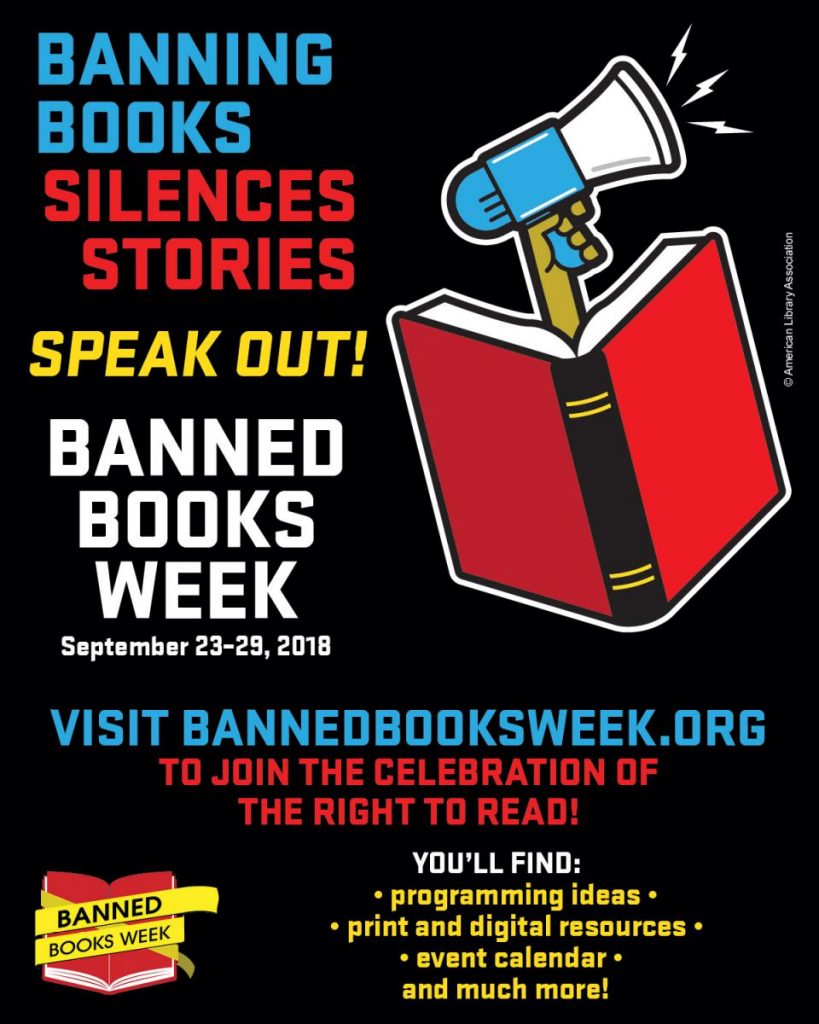 The celebration of reading is here! Banning books silences stories, so speak out against censorship all week at evens around the world!

Be sure to visit the Banned Books Week event page at https://bannedbooksweek.org/events/, where you can find events happening all over the world! If you’re hosting an event, let us know about it by completeing this form — we’ll add it to the map!

Join the Dramatists Legal Defense Fund, in partnership with PEN America, as they present Banned Together: A Censorship Cabaret during Banned Books Week 2018 (September 23-29). This lively celebration of songs and scenes from shows that have been censored or challenged on the American stage raises awareness around issues of censorship and free expression in theater. The performances will feature selections from Chicago, Spring Awakening, Cabaret, Rent, and Angels in America, among other notable works. https://pen.org/event/banned-together-san-francisco/

It’s the start of Banned Books Week, so come in for some rebellion fun. Take pictures with banned and challenged books. Find out about defending comic books and the First Amendment with Comic Book Legal Defense Fund. Enjoy food, games, and prizes! https://www.hillsboro-oregon.gov/departments/library

Banned Together: A Censorship Cabaret—Baltimore, Maryland
Zion Church of the City of Baltimore, 7:30 – 9:30 p.m. ET

The Dramatists Legal Defense Fund, in partnership with PEN America, presents Banned Together: A Censorship Cabaret. Join WYPR’s Tom Hall and talented local singers in a celebration of songs and scenes from shows that have been censored or challenged on America’s stages, created to raise awareness around issues of censorship and free expression in the theater. The performances will feature selections from Chicago, Fun Home, Spring Awakening, and The Laramie Project,among other notable works, with a libretto by DLDF President John Weidman. Light refreshments will be provided. https://pen.org/event/banned-together-baltimore-md/

Books on the Chopping Block
September 23 @ 2:00 pm CDT
Free Dramatic Readings by City Lit Theater Company of excerpts from the Ten Most Frequently Challenged Books in America, as compiled by the American Library Association’s Office of Intellectual freedom. The program lasts approximately 60 minutes and is taking place all week at locations round the Chicago area.

“CENSORED” features 21 provocative photos from Kimberly Butler’s forthcoming book of the same name. The photos she chose for this unique exhibition illustrate that “banning books silences stories” – the theme of this year’s “Banned Books Week” event – and that everyone needs to speak out against censorship.  Butler’s “CENSORED” photos are “a personification of books that have all been banned at one time or another,” she explains, “with quotes from the books emblazoned across each person’s body.” More info…

The Phantom Players and Director Tracey Frame are excited to bring Oscar-nominated actress Mary Badham to Richmond for an unprecedented theatrical performance of Harper Lee’s classic American novel, To Kill A Mockingbird, as adapted for the stage by Christopher Sergel. This limited time engagement will run for three shows only, September 21-23, at the Lynn Theater on the Midlothian Campus of John Tyler Community College.

The 1962 movie starred Gregory Peck, who won the Oscar for Best Actor, and introduced audiences to a young actress named Mary Badham, who was nominated for Best Supporting Actress; at the time, she was the youngest performer to be so honored. In a rare moment of life imitating art, Mary Badham will not be reprising her role as Scout, but evolving into Jean Louise Finch–the adult version of the same character she played as a child–who serves as the show’s narrator. This once-in-a-lifetime event will not be performed anywhere else and is likely to sell out quickly. More info…

Kick off Banned Books Week with a Jeopardy style game about banned books and a Q&A with the authors of True Stories of Censorship Battles in America’s Libraries; Kathy Barco and Valerie Nye. More info…

Raise a pint and your intellect! Kick off Banned Books Week with Alicia DeFonzo, nonfiction writer and Lecturer of English at Old Dominion University, while exploring the topic of censorship in literature and the inevitable effects intellectual freedom has on children.

Brick & Mortar Brewing Company and Suffolk Public Library presents Talks on Tap, a guest lecture series with an informal flair. Sit back, relax, enjoy a beverage and learn something new to impress your friends with later. More info…

Join independent Publisher Saqi Books and Bidisha at The Book Club, Hoxton, to kick off Banned Books Week. Bring along a pen and your bookish friends and prepare to be shocked by the real and dangerous – and often ludicrous– state of book censorship past and present around the world.

There will be PRIZES (read ‘prizes’ as ‘books’) and approximately ten rounds of questions. Audience engagement actively encouraged. Heckles only accepted in the form of haiku. More info…