Banned Books Week kicks off on Sunday, but events celebrating the right to read are already underway! Are you still looking for something to do to honor challenged and banned books? We have a few ideas to get you started…

First, be sure to visit the Banned Books Week event page at https://bannedbooksweek.org/events/, where you can find events happening all over the world! If you’re hosting an event, let us know about it by completeing this form — we’ll add it to the map!

The members of the Banned Books Week Coalition have a number of events planned for the annual celebration of the right read! Show your support for their efforts defending the right to read by attending any of these great events, including the Dear Banned Author Letter Writing Campaign, Banned Together: A Censorship Cabaret, the Speaking Out: Voicing Movements in the Face of Censorship webinar, and much more! View Coalition events here: https://bannedbooksweek.org/banned-books-week-coalition-events-calendar/

We will keep this calendar updated as more events are confirmed, so please check back! 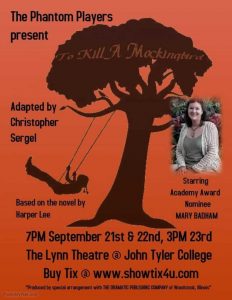 The Phantom Players and Director Tracey Frame are excited to bring Oscar-nominated actress Mary Badham to Richmond for an unprecedented theatrical performance of Harper Lee’s classic American novel, To Kill A Mockingbird, as adapted for the stage by Christopher Sergel. This limited time engagement will run for three shows only, September 21-23, at the Lynn Theater on the Midlothian Campus of John Tyler Community College.

The 1962 movie starred Gregory Peck, who won the Oscar for Best Actor, and introduced audiences to a young actress named Mary Badham, who was nominated for Best Supporting Actress; at the time, she was the youngest performer to be so honored. In a rare moment of life imitating art, Mary Badham will not be reprising her role as Scout, but evolving into Jean Louise Finch–the adult version of the same character she played as a child–who serves as the show’s narrator. This once-in-a-lifetime event will not be performed anywhere else and is likely to sell out quickly. More info…

Chapel Hill Public Library’s popular Banned Books Trading Cards are back for the sixth year. You’re invited to get a sneak peek at the winning submissions, meet the artists, and celebrate the opening of the exhibit in the library’s lobby. Original works from local artists will be on display. All pieces were inspired by books and authors that have been banned or challenged. There will be refreshments, a silent auction of the seven winning pieces of original artwork, and complete sets of this year’s cards. This year’s winning entries will also be prominently featured and larger than life on a Chapel Hill Transit bus. Come see it for yourself the night of the party and keep an eye out for it around town all year. More info…

Comic books and censorship have a shared history most famously dating back to the 1950s, but there is still cause for concern today. As comics and graphic novels increasingly appear on the shelves of local libraries and schools (and increasingly appeal to a more sophisticated audience), they are increasingly vulnerable to having their content challenged. Then as now, the issue is whether the viewpoints of the few should dictate what the many may read and enjoy.

As a precursor to “Banned Books Week” (beginning Sunday 9/23 through Saturday 9/29), join the True Believers Graphic Novel Book Club on Saturday, September 22, as we celebrate the freedom to read by discussing a selection of “banned” graphic novels that have been challenged for content in recent years. Our “Banned Books” panel discussion will take place with a live audience at the Galaxy Comic and Fantasy Art Expo in Joliet, Illinois! More info…

“CENSORED” features 21 provocative photos from Kimberly Butler’s forthcoming book of the same name. The photos she chose for this unique exhibition illustrate that “banning books silences stories” — the theme of this year’s “Banned Books Week” event — and that everyone needs to speak out against censorship.  Butler’s “CENSORED” photos are “a personification of books that have all been banned at one time or another,” she explains, “with quotes from the books emblazoned across each person’s body.” More info…

Come enjoy a day at Hogwarts to celebrate the 20th Anniversary of Harry Potter, while kicking off National Banned Books Week! We will have information on all your favorite Banned Books, as well as some real Hogwarts classes for kids and kids at heart. More info…