What are you doing to celebrate Banned Books Week today? Here are a few suggestions for events around the country!

Let’s take a look at how people are celebrating today! 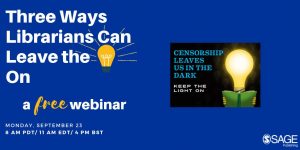 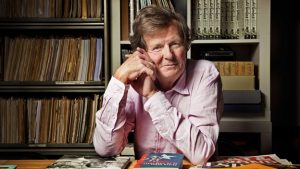 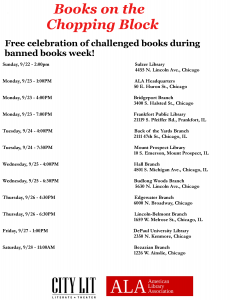 Free dramatic readings by City Lit Theater from the Ten Most Frequently Challenged Books in America, as compiled by the American Library Association’s Office of Intellectual Freedom. The program lasts approximately 50 minutes. Find out more »

Banned Together: A Censorship Cabaret is a celebration of songs and scenes from shows that have been censored or challenged on America’s stages, created to raise awareness around issues of censorship and free expression in the theater. Sponsored by the Dramatists Guild and the Dramatists Legal Defense Fund, performances are taking place across the country during Banned Books Week, September 22-28.This Florida performance is directed by The Studio@620’s Bob Devin Jones and is a 50-minute mix of scenes and songs from plays and musicals producers have objected to, including The Complete Works of Shakespeare (Abridged), Rent, Fun Home, An Octoroon, Kleptocracy, Chicago, and Cabaret. Find out more »

Banned Together! A Philadelphia Premiere!

Banned Together: A Censorship Cabaret is back for its fourth year in a row and appearing for the first time in Philadelphia! The Dramatists Legal Defense Fund (DLDF) created Banned Together as a celebration of songs and scenes from shows that have been censored or challenged on America’s stages, created to raise awareness around issues of censorship and free expression in the theater. The performances will feature selections from Cabaret, Chicago, The Complete Works of Shakespeare (abridged), An Octoroon and Calendar Girls, among other notable works, with a libretto by DLDF president John Weidman (Assassins) and J.T. Rogers (Oslo, Blood and Gifts). Find out more »

BOSTON: Banned Together: A Censorship Cabaret

The Dramatists Legal Defense Fund, in partnership with PEN America, presents Banned Together: A Censorship Cabaret, a celebration of songs and scenes from shows that have been censored or challenged on America’s stages; Banned Together was created to raise awareness around issues of censorship and free expression in the theatre. Previous performances have featured selections from Cabaret, Chicago, Fun Home, Rent, and Angels in America, among other notable works, with contextual commentary by DLDF president John Weidman (Assassins). Find out more »

The Dramatists Legal Defense Fund (“DLDF”) in partnership with PEN America is pleased to present the Fourth annual Banned Together as a part of Banned Books Week (September 22nd-28th), the annual celebration of the freedom to read. Our Houston performance is Monday, September 23, 7:30pm at the Alley Theatre, Hubbard Stage. Banned Together is a celebration of scenes from shows that have been censored or challenged on America’s stages, and was created to raise awareness around issues of censorship and free expression. Find out more »

Banned Together: A Censorship Cabaret is a celebration of songs and scenes from shows that have been censored or challenged on America’s stages, created to raise awareness around issues of censorship and free expression in the theatre. This is the fourth year that Banned Together will be presented in Chicago. In previous years, Banned Together has been presented in over twenty-five cities across the U.S., and will be presented in multiple cities again this year, as a part of Banned Books Week.The Chicago performance will feature selections from Cabaret, Chicago, Fun Home, Rent, and Angels in America, among other notable works, with a libretto by DLDF president John Weidman (Assassins) and J.T. Rogers (Oslo, Blood and Gifts). Find out more »

Get caught reading a banned book! Use our background and props and your own phone to snap a photo of yourself with your favorite book from the lists of Frequently Banned and Challenged Books. Then post it to your social media to let people know you support the right to read freely! If you don’t mind us using your photo on our social media, use our hashtag, #SCLReadsFreely, and you could be featured on SCL’s Twitter or Facebook! All ages. Find out more »

We’re doing it again! Due to last year’s response, Banned Books Week this year will again include our all-ages Readathon! Can you read three banned books of your choice in a week? Sign up for our challenge and tell us what you plan on reading. For each book you finish, you get one entry into a raffle to win some cool prizes! Challenge yourself and bone up on classics old and new. Find out more » 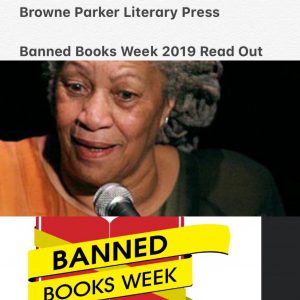 Annually since 2005, we at Browne Parker Literary Press have hosted a Banned Books Week Event, and many times Toni Morrison took the mainstage to read excerpts from The Bluest Eye, which has been challenged by many school districts and libraries. This year, to honor her legacy and to celebrate banned books, we will hold a read out exclusively featuring the works of Toni Morrison. Many local personalities will read selected excerpts from her works. Find out more » 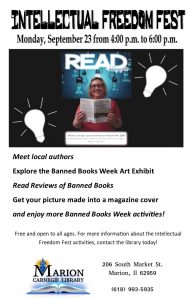 Commemorate Banned Books Week, and join San Diego Public Library staff and community readers for the library’s annual Read-Aloud Read-a-thon. A new book and a new reader every 15-30 minutes. All are also invited to Banned Books Live! 2019, an entertaining evening of stage readings from censored books by actors from Write Out Loud, starting at 6:30pm. And while you’re here check out the historical banned books displays on the 1st and 2nd floors of the library. Find out more »

Censorship Leaves Us in the Dark — Keep the Light On: The Suppression of Thoughts, Ideas in Culture, Places, Art, and Children’s Literature

A panel discussion about censorship in literature, art, media and prisons. This event will take place at Eastern Connecticut State University at the J. Eugene Smith Library in The Paul E.Johnson Community Conference Room. Find out more » 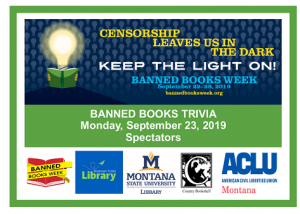 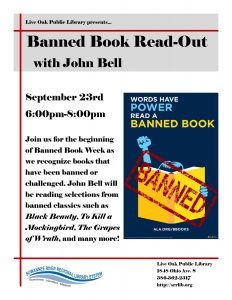 For Banned Books Week, our library will be recognizing books that have been banned or challenged and will be celebrating the freedom to read whatever we choose. John Bell will be reading selections from banned classics such as Black Beauty, To Kill a Mockingbird, The Grapes of Wrath, Uncle Tom’s Cabin, and many more! Find out more » 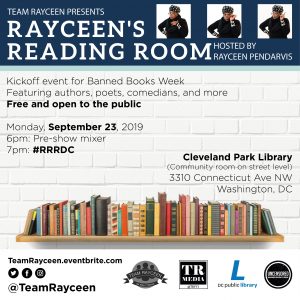 Team Rayceen presents Rayceen’s Reading Room Hosted by Rayceen Pendarvis Kickoff event for Banned Books Week Featuring authors, poets, comedians, and more Free and open to the public! Please check @TeamRayceen on social media for announcements about guests and performers. This event will take place in the newly renovated Cleveland Park Library, in the community room, directly across from the main entrance on Connecticut Avenue NW. Doors to the community room will open by 6pm and the program will begin at 7pm. Find out more » 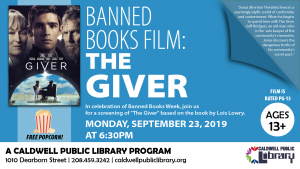 In celebration of Banned Books Week, join us for a screening of The Giver based on the book by Lois Lowry. The Giver: Jonas (Brenton Thwaites) lives in a seemingly idyllic world of conformity and contentment. When he begins to spend time with The Giver (Jeff Bridges), an old man who is the sole keeper of the community’s memories, Jonas discovers the dangerous truths of his community’s secret past. Find out more »

During Banned Books Week, join us for an evening of forbidden knowledge in books censored in the US in 2018. Stage actors from Write Out Loud and more will perform live readings from selected books marked with the scarlet letter of censorship.  Join us for an entertaining evening of bacchanal revelry in the written word. Excerpts from the work of Toni Morrison will also be performed. Community readers are invited to read with us at the 8th Annual Banned Books Read-A-Thon earlier in the day. Find out more » 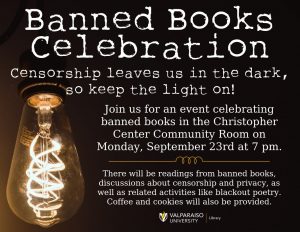 Join us for an event celebrating banned books it the Christopher Center Community Room on Monday, September 23rd at 7 pm.  There will be readings from banned books, discussions about censorship and privacy, as well as related activities like blackout poetry.  Coffee and cookies will also be provided.  Censorship leaves us in the dark, so keep the the light on! Find out more » 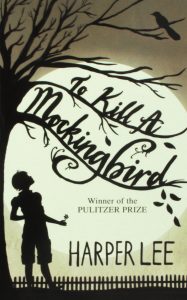 Harper Lee’s To Kill a Mockingbird has a long history with censorship. It holds the seventh slot in the American Library Association’s top ten most challenged and banned books list for 2017, and it also appeared on the 2009 and 2011 lists. It has been challenged for the depiction of violence, offensive language, and racism.

To Kill a Mockingbird, which was published in 1960, is told from the perspective of 6-year-old Jean Louise Finch, whose father Atticus defends Tom Robinson, a black man accused of raping a white woman, in court during the Great Depression. Despite proving that Tom is innocent, the jury convicts him of the crime. The book explores themes of racial injustice, gender roles, and the loss of innocence. It has been a perennial bestseller since its release and won the Pulitzer Prize. It was also adapted into an Academy Award-winning film in 1962.

In 2017, To Kill a Mockingbird was removed mid-lesson from 8th grade classrooms in Biloxi, Mississippi, over complaints about language in the book, in particular the use of the N-word. The parent who filed the complaint was concerned about her daughter, who is black, and her classmates’ response to the book, which reportedly included laughter over the use of the slur. The complainant did not ask for the removal of the book, and the actions of school officials appeared to be in violation of the district’s materials reconsideration policy. The district maintained the act wasn’t censorship because the novel remained available in school libraries. After protest from free speech advocates, the book was restored to optional reading lists, but parental permission is required to read it.

In early 2018, To Kill a Mockingbird and Mark Twain’s Adventures of Huckleberry Finn were removed from required reading in the Duluth, Minnesota, school district over the use of racial slurs. The removal wasn’t triggered by a specific challenge in this case, instead resulting from the accumulation of complaints over the course of several years. District teachers were not consulted in the decision. Free expression advocates protested the unilateral removal, calling on the district to include those best positioned to make decisions about educational content in future curricula review.