Banned Books Week is kicking off with events, events, and more events! The Banned Books Week Coalition is delighted to have Youth Honorary Chair Cameron Samuels leading a chat with other youth activists, and the members of the Coalition have some exciting things in store for today! Keep reading for look at what we’re up to today…

The Kids Are Alright: Youth Activists on Fighting Censorship

What is it like to be the only teen protesting censorship at school board meetings? How do you go from being the only voice of opposition to leading the fight against censorship in your community – and inspiring others to do the same? In this program, Banned Books Week Youth Honorary Chair Cameron Samuels (they/them) … Read More

Maia Kobabe’s Gender Queer: A Memoir achieved resounding victory in the Virginia courts. Join CBLDF for an inside look at the case from Maia’s legal representation in Virginia Beach, Jeff Trexler (CBLDF Interim Director) and Steven Emmert. Learn the roots of the case, its progression through the legal system, and why the case was dismissed. This event is a great … Read More

The books that are most frequently targeted for censorship are those that capture the attention of younger readers, which leaves many of them confused about the validity of their interests, their personal identities, and their First Amendment rights. This program will examine the censorship of content for young people and their rights from the perspective … Read More

When Your Book Is Banned: The Author’s Perspective

What is the impact on authors when their books are banned from schools, libraries, and elsewhere? What challenges do they face? Does it affect sales or marketing? Does it change what or how they write going forward, or impact their ability to sell their next book? Much of the public discourse focuses on the politics … Read More

Join PEN Across America, Mount Vernon Public Library, and Banned Book Week Chairs Alyssa Gómez Lawrence and Debbie Nabubwaya Chambers on Monday, September 19 at 7:00 PM for an online discussion of Ray Bradbury’s classic novel, Fahrenheit 451 and the issues the book raises around censorship and free expression. About Fahrenheit 451: Guy Montag is a fireman. His job is to destroy the … Read More

It’s Your Right to Read!

Banned Books Week offers an opportunity for readers to voice censorship concerns, celebrate free expression and show their communities the importance of intellectual freedom. The Banned Books Week Coalition partnered with HarperCollins Childrens Books, Little Free Library, and Bookshop.org on resources to help people know their rights, report censorship, and get involved. Check them out the resources here.

Download a full PDF of the new resource here.

Banned Books is almost here! Banned Books Week officially kicks off on Sunday, and we’re excited to have an amazing lineup of Facebook livestreams to mark the week! Check them out!

All events are free — simply join the Banned Books Week Facebook page at the appointed hour! These are a great opportunity to engage your students or patrons in Banned Books Week programming, and each event will feature a short Q&A.

What is it like to be the only teen protesting censorship at school board meetings? How do you go from being the only voice of opposition to leading the fight against censorship in your community – and inspiring others to do the same? In this program, Banned Books Week Honorary Chair Cameron Samuels (they/them) will lead a conversation with youth activists from around the United States. These inspiring young leaders will talk about their experiences and share their ideas for how others can get involved! More info…

Join Banned Books Week Honorary Chair George M. Johnson for an intimate conversation about censorship and how it impacts readers, especially young adults. Johnson will discuss the censorship of their critically acclaimed bestselling novel All Boys Aren’t Blue, which was the third title on the American Library Association’s Top 10 Most Challenged Books of 2021, and the ongoing attacks on books and information related to LGBTQ+ identity. This one-on-one conversation will be led by Freedom to Read Foundation President and librarian Peter Coyl and include a short Q&A. More info…

Angie Thomas and Jerry Craft Get Real About Censorship

Join New York Times bestselling authors Angie Thomas (The Hate U Give, On the Come Up, Concrete Rose) and Jerry Craft (New Kid, Class Act) for a conversation about the censorship of books dealing with racial identity and racism. The authors will discuss the censorship of their work and the implications for readers, authors, and the community. They will be joined by Jeremy C. Young, Senior Manager of Free Expression and Education at PEN America, who will offer perspective on how legislation is impacting and even fueling censorship. The program will be moderated by Amber Payne Co-Editor in Chief for The Emancipator, a digital commentary platform born from a collaboration between The Boston Globe and Boston University’s Center for Antiracist Research.

Event made possible with the support of HarperCollins Publishers. More info…

Comic books have been targeted by censors for decades, from 1954 Senate subcommittee hearings about their alleged link to juvenile delinquency, to the implementation of a content code that nearly destroyed the industry, to today’s widespread attacks on comics, especially those that share the stories of LGBTQ+ individuals. Join the creators of two of today’s most acclaimed and frequently censored graphic novels — Maia Kobabe (Gender Queer) and Mike Curato (Flamer) — for a conversation about the attempts to censor their work and LGBTQ+ stories. Greg Rokisky, Senior Manager of Digital Strategy at PFLAG National, and Jordan Smith, Digital Editor at Comic Book Legal Defense Fund, will lead the conversation. More info…

Banned Books Week is the annual celebration of the freedom to read. The event is sponsored by a coalition of organizations dedicated to free expression, including American Booksellers for Free Expression, American Library Association, American Society of Journalists and Authors, Amnesty International USA, Association of University Presses, Authors Guild, Comic Book Legal Defense Fund, Foundation for Individual Rights and Expression (FIRE), Freedom to Read Foundation, GLAAD, Index on Censorship, National Book Foundation, National Coalition Against Censorship, National Council of Teachers of English, PEN America, People For the American Way Foundation, PFLAG, and Project Censored. It is endorsed by the Center for the Book in the Library of Congress. Banned Books Week also receives generous support from HarperCollins Publishers and Penguin Random House.

Don’t be left in the dark this Banned Books Week (Sept. 22-28, 2019). The American Library Association’s Office for Intellectual Freedom (OIF) offers several resources and activities for libraries and readers that highlight the Banned Books Week 2019 theme “Censorship Leaves Us in the Dark. Keep the Light On.”

The Dear Banned Author letter-writing campaign encourages readers to reach out to banned or challenged authors via letters, emails, and tweets. The program aims to raise awareness of books that are threatened with censorship and ignite discussions about the essential access to a variety of library materials. Authors have also shared fan letters as support when there’s a public challenge to their books.

Libraries are invited to host letter-writing programs. Printable postcards and author mailing addresses can be found on the Dear Banned Author webpage. Eligible tweets to or about banned and challenged authors with the hashtag #DearBannedAuthor will be entered into a drawing to win Banned Books Week materials. Learn more and read the Official Rules before entering.

Readers and libraries can also support the power of words onscreen. The annual Stand for the Banned Read-out invites readers to film themselves reading banned books or talking about censorship. Videos are highlighted on the Banned Books Week YouTube channel.

OIF staff will explore censorship themes with two free webinars designed for libraries and schools to stream as programs during Banned Books Week celebrations. Anyone is welcome to register and attend. 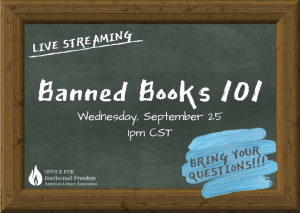 Library workers are invited to join the free webinar “Three Ways Librarians Can Combat Censorship” on Monday, Sept. 23, hosted by SAGE Publishing, Index on Censorship magazine, and OIF. During the webinar, librarians will share their experiences and tips with navigating censorship. The webinar will also highlight how contested books can engage readers in constructive conversations.

In celebration of Banned Books Week, banned book T-shirts on the ALA Store will be marked down to $7 starting Sept. 20.

The Celebrating Banned Books Week Facebook group offers a space for readers, library workers, educators, and booksellers to share programming, promotion, and display ideas. Members can also highlight how their community is celebrating the freedom to read. Facebook pages and Facebook users are invited to join the group by answering two questions.

Those celebrating Banned Books Week can also submit their program information to be displayed on Banned Books Week Coalition Events Calendar. The calendar allows readers to search for events in their local area.